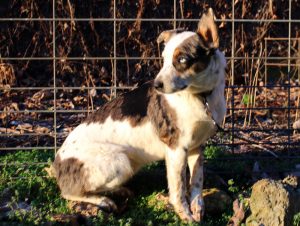 This female Heeler and Australian Shepherd dog was found in the city limits of Advance Missouri 3/1/17 when she was trying to get into the Town and Country store for a snack. She is wearing a collar, about 1 year of age and weighs about 35 pounds. Call Marilyn at 573-722-3035 if you know who owns this dog or if you are interested in adopting her. She has herding instincts and is an active gal.

I want to start this week’s report by reminding our readers I do not believe in banning of breeds for city limits or that I have prejudice against any bully breeds. In fact there is only one breed of dog that I would extinguish from earth if I could. I question the breeding purpose and the level of temperament aggression towards humans that breed exhibits. It is an extremely dangerous dog breed.

If I could outlaw a breed of dog it would be the rare breed Fila Brasileriro.

I have been up close, but not personal, with the Fila Brasileriro at dog shows back in the late 1990’s. The judges don’t even touch the breed and stand a healthy distance from them when in the show ring.

Showing fear towards the breed makes them even more dangerous. That makes sense because an aggressive dog requires a confident powerful owner that they can respect.

The Fila is so vicious and dangerous because they tend to also be fearful and territorial. That is how a handler / trainer explained them to me as well as a couple of owners of the breed. Their dog’s body language also showed the fearful tendencies.

While in the ring the tail was low, not high and cocky like a confident dog. The dogs were uncomfortable as if to say, “I want the heck out of here…I don’t like being stared at. I don’t like having to deal with the activity of these odd strangers, and I just want to spank those people for looking at me…”

Why on earth would anyone have a dog like that?

The few people I talked to who have had the breed had them for protection purposes: “no one will get past the door” kind of protection.

A dog like that is like a hungry lion in a cage given a live chicken as a companion. I don’t think it wise to think the chicken will be safe. Visitors are not safe: not visiting relatives, not the UPS driver, not their kids friends from school…

I witnessed a Fila attack one of its handlers at a dog show. A brother who had been with the dogs for two weeks, the dogs knew him well, but when he went in front of them and starred at them to take a photo of the owner holding them, the one leap at the man taking the photo. All hell broke out as people all around started to run, screaming. The exact thing you SHOULD NOT DO.

The huge dogs were hard for the owner to handle. No one went to the hospital but this is how serious it can be when you OWN a CANNON that can explode over the simplest mistake made by a family member in the home of an aggressive dog.

There are rules to keep from aggravating dogs into an aggressive state.

First do not stare at a dog that is acting aggressive towards you. Staring is challenging and it is the trigger for two dogs to get into a fight, so logically it is also a trigger for an aggressor or a fearful dog to feel compelled to attack to make you submit (alpha thinking),or to rid of the perceived aggressor (fearful dogs may think YOU are a threat).

It is best not to add dogs to a home with small children where the kids will be unattended UNLESS you don’t have a pack of dogs or the dog or two dogs have a submissive nature and show respect for small children.

Running and screaming excites many dogs, especially herding and terrier breeds. The Rottweiler is a herding breed. A few years ago a police officer from Louisiana had a pair of intact mating Rottweilers. His son was running and playing with the family pets in the fenced in yard. Later the child was found being thrown in the air like a game, mauled to death by the family pets.

Dogs are more apt to be aggressive when in a pack: two or more make a pack. This is why it is so important that all the dogs in your home be well-mannered and loving. They need to be submissive in nature when you have children in the home or as visitors.

It just takes one testy dog in your pack to start a dog pack fight or to harm a visitor or family member.

Spring is the time we see more dog to human and dog to dog attacks because we humans are outside playing or working, more accessible to where our pets and strays may be. This is also when more female dogs are in season and male dogs become more testy based on testosterone. Spaying your female dogs is just common sense and neutering your pet dog makes sense.

My youngest brother was just one year older than I. When we were very young our parents put up a yard fence around the house so they could keep us safe from the dogs in the yard and the farm machinery. There was no other logical reason to do so. This cost them a lot of money because it was a huge fenced in area. They kept us safe from harm until we were older, yet I look back and see there were many times I was lucky I was not harmed by my neighbor’s Australian Shepherd male.

My parents never spayed a farm pet. Dad neutered the males himself, saving a vet bill, but causing a great deal of pain and suffering to the male dogs. Dad hated to do it but he knew that a neutered dog was a less aggressive dog. Yet the female Shepherd we had would lure the neighbor’s dogs when she came into season.

A neighbor’s Australian Shepherd was very aggressive and protective of our female. He fought our neutered males and growled at me many times. To this day when I visualize that dog my memory of him is his teeth.

We can help the female dog owners in the area to spay their dogs and cats too if they call us and ask for assistance. We still have money in our Spay Grant. If you have a hardship we can help you. If you have multiple pets and need help to get them done call us. If you have suffered a recent hardship (between jobs, medical expenses for you, etc.), are in the military, or you are low income you can call us for assistance: 573-722-3035.

Spay and neuter just makes sense, especially when you have small children in the family.

… Female Walker Coonhound was not claimed.

Adoptions, return to owner or placed in other rescues (1):

… Smiley: with us for two years, adopted to a Bloomfield family who run an orchard.

… Black female Lab mix that was missing near Twin Bridges is now home!

… Female Walker Coonhound has Ehrlichia and is being treated.