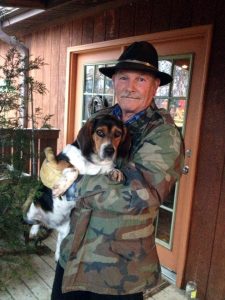 Fred loves his dogs, his horses, his many cats and his many birds. He and wife Sherry have a beautiful ranch where they are all well cared for. Fred is holding Sally Mae, his Beagle and Basset mix dog. Notice the ever present twinkle in his eye and joy in his face. This is the Fred we have come to know.

May is ALS awareness month. ALS is Amyotrophic Lateral Sclerosis also commonly known as Lou Gehrig’s Disease. ALS is a progressive neurodegenerative disease that causes muscle weakness, paralysis, and ultimately, respiratory failure in humans. This week’s story and report is dedicated to Fredrick McGruder and his family. I just learned Fredric, known by his friends as simply Fred, is battling the complex disease: ALS.

Even though Fred is of Scottish decent, he reminds me of a Leprechaun: always a smile and a twinkle in his eye just like his wife Sherry. I met Sherry on the tele while she was helping a stray dog sitting by the door of the courthouse where she works. I then learned she had a clowder of, group of, rescued cats, all spayed and neutered.

They have two daughters. Ellie is a student at SEMO and Makayla a student with agriculture, animal science interests at Columbia Missouri.  Makayla has been like manna from heaven. Two summers ago she called to volunteer 40 hours for a summer class project, she in Patton, we in Zalma: an hour drive.

Last fall while having an oil change at Sitze Auto Body, Inc Fred walked in looking as chipper and eyes bright as ever. Then he tried to talk to me I thought he had laryngitis. He could not talk. He smiled and took a scrap of paper to jot down his thoughts.  “Would you like some more duck meat?” he wrote.

The fall before Fred,Sherry and  daughter Makayla came to our home and brought with them several Muscovy ducks which we all butchered and packed in our freezer. Later they brought more that Fred butchered at home and packaged for us.

How many folk do you know to be that generous and do that much work just because they learned another person liked duck? He did it because his family was grateful for what we do for the animals. Just because you like and eat meat does not mean you don’t think livestock and pets should be well cared for.

They came out another day and helped cut the overgrown branches in our driveway. Later Fred came out to cut down and haul off firewood from a fallen tree in the front yard’s pasture. Fred had unending energy and a sense of community as well as a giving spirit. Sherry is the same. Makayla has followed their lead. I haven’t had a chance to know their younger daughter Ellie who is busy with her schooling.

Fred and Sherry have been married 25 years. Before Sherry, he was a proud Marine who did not fight in a war, but he is fighting a battle now that started when he joined the military in the late1960’s. One of the bases Fred was stationed was Camp Lejenue in North Carolina. Research has proven that the drinking water at that camp was toxic for several years.

According to an internet story on Wikipedia : “The Camp Lejeune water contamination problem occurred at Marine Corps Base Camp Lejeune from 1953 to 1987. During that time, United States Marine Corps (USMC) service members and their families living at the base bathed in and ingested tap water that was contaminated with harmful chemicals at concentrations from 240 to 3400 times levels permitted by safety standards. An undetermined number of former base residents later developed cancer or other ailments, which many blame on the contaminated drinking water.”

Later in the same article the type of diseases associated to the soldiers and their families were stated as liver cancer, kidney cancer, and ALS.

Fred also received questionable vaccines at that time which also have been linked to nerve affecting diseases in groups of our military personnel. According to Fred’s doctor at Washington University in St. Louis, two more nerve diseases that have attacked Fred are related to that or those vaccines. Fred has been suffering from adverse symptoms to his nervous system for almost two years. He complained of problems a year ago last November and went to St. Francis then Southeast with no one able to give him answers to his muscle issues or occasional loss of voice. Finally a doctor at Southeast sent him to Washington University. That day he was examined for over 4 hours by several doctors, and finally diagnoses was given of three neurological diseases that were at war with his muscle and nerve system. He was in a battle for normalcy that he cannot win.

Usually his diseases affect the ability to talk and swallow last, but Fred is unique in life and now unique in disease. Last fall he put up and handled at least 1000 bales of hay for their horses and livestock. Sherry said, “Fred is very active and he is always up doing something.”  His doctors feel that his active lifestyle, and I am sure too that his positive and outgoing personality, are why he has maintained use of his legs and arms. Until recently, Fred never took a nap. He had too much to do for himself or for someone else to relax.

I did a little research on ALS. I learned the disease is not well funded and finding a cure is dependent on donations. In honor of a man and a family who are such amazing and giving people themselves, I ask you to consider donating to the ALS Foundation in the name of Fredric McGruder. You can donate on the following website: http://webstl.alsa.org  .

Fred brought up his children to love, care about, and to respect nature and animals. He also taught them about farming and animals as livestock for a livelihood. He and Sherry taught them about community and how important it is to give back by volunteering.  Now he is teaching all of us about ALS.

Fred has been a light of sunshine for those around him and the pot of gold at the end of the rainbow for his family. I wish I could grant Fred three wishes and they would be cures for his three diseases.

Cat calls:
… Brown tabby male and another male, black with white, age 1, neutered and shots completed, free to good homes. Owners are moving.
… Calico long coat female and another cat male black with white declawed in front are free to good homes. Child is allergic.
… Two grey and one black kitten, all long coats, age 8 weeks up for adoption.
… Most days we are receiving multiple calls about cats with litters. Please spay your cats.
… Several cats to give away.  Call 573-722-3035