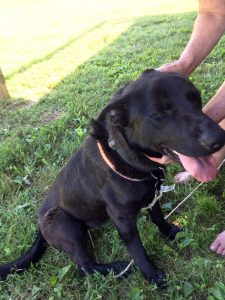 A large black male dog was found off of Hwy 51 and “A” outside of Patton. This dog was found mid week a little thin. Call to claim or adopt 573-722-3035. He reminds me of an Aussie Lab or German Shepherd Lab mix.

This is week three that I am writing about my husband’s history with music. I believe how he lived, what adventures he experienced in real life, help explain the feelings he shows in the music he plays through his sax.

Michael put together and donated a CD of classic ballads to the Bollinger County Stray Project as a fund raiser to help the community and the many pets needing to be re-homed.

Last week’s story ended with Michael finishing the Army 82nd Airborne as a paratrooper. It seemed he may have secretly wanted to fly as a young child. While in sixth grade and when still in school n St. Louis his favorite school outfit was that of a pilot. He wore a leather flyer cap complete with chin straps hanging. To complete the authentic look he wore knickers. When he moved to Chattanooga and wore that to school the kids thought it a silly Yankee outfit! He never forgot the teasing. The bully kids helped form the man who would later become a brave and proud agent for the FBI.

He gained respect when he started to box. Michael earned his Reserve Golden Glove Title of the South at the young age of 17. He learned how to run with his mutt dog from a pack of bullies, then to run from point A to B because he did not have a car. He would run in high school track because the coach wanted the football players to develop stamina. That love for running and competitive sports was also evident is his music that he played in wild honky-tonk bars.

After wild Tennessee and then the Army, Michael went back to his birthplace of Cape Girardeau Missouri to go to college on the GI bill. He had fond memories of Cape as a small child. His best friend had been Jerry Kinder, also a saxophone player in school who would grow up to became surgeon Dr. Jerry Kinder of Cape Girardeau.

He recalls they lived at the edge of Cape where Southeast Hospital is now located. There was a farm in the area with a pony that he wanted to buy. He so badly wanted that paint pony he purchased one after he met me. He had run and played with his two dogs which ran loose in city limits. He remembers the dog Tex following the family car on the way to the downtown movie theater on Broadway. The bond of that childhood dog and his death from being fed glass in meat is as vivid to him today as then.

Life was very simple in Cape when he was a child. The city had grown a lot by the time he returned to its college to major in History and Physical Education.

He brought with him his mother’s silver alto sax and began playing it to the radio for friends and at a few college dance parties with other college musicians including Terry Heuer who played a tenor sax. Michael played by ear to songs popular in the late 40’s and early to mid 50’s, songs now called classics or standards. Mostly he loved playing ballads which allow a musician to feel the theme and meaning of the song.

Michael would marry after graduating from college and have a daughter, his only child. They rented a home and he was able to have his own dog. So he purchased two German Shepherd s which were his very loyal side-kicks.

Michael lived in the area now known as Scott City. One day a friend and he were at “the Bluffs” area. Bored and with the daring spirit, he and his friend decided to swim across the Mississippi. Michael’s cousin Morris was to hold the two German Shepherds while they swam. When the young men were a good distance across Morris let the dogs loose. The loyal dogs jumped in the Mississippi and swam to Michael’s side, all crossing safely. They walked to the train tracks and planned to walk across but were told they couldn’t (for obvious reasons) so they walked along the river’s bank north a good ways and jumped back in the Mississippi, dogs and men, to float and swim back towards the Bluffs. Today he looks back realizing how foolish he was and the danger he, his friend, and his dogs were in because of their loyalty to him.

At that time Michael’s tenor sax friend Terry Heuer was playing with a group called “Mirt Merly and the Rhythm Steppers.” When Terry had to move on he suggested Mirt hire Michael. Michael traded his alto sax and extra money for a Selmer Mark VI tenor sax, now known as the best sax ever made.

Dance moves were the fashion of the day made more popular with the introduction of Elvis Presley. Michael’s instructions were to lighten up and learn to move on stage as well as to learn to improvise. Soon after being hired he was given a “good talking to” by Mirt to shape up or he would be fired. That “talk” forever changed the straight-way Michael had played. He learned to put feeling in his music and even though he has two-left-feet on a dance floor, he learned to move and feel the music while blowing his horn.

He was listening to popular vocal hits that an upcoming saxophone star named Boot’s Randolph was playing the sax. Michael learned how to make his sax scream, mastered vibrato, and much more a sheet of music could not teach him.

One of the gigs Mirt’s group played included a young talented singer named Charlie Rich. At that time Charlie played his instrument and sang without a band to back him.

After two years working with Mirt’s band Michael had to give away one of his Shepherd dogs when his young family had to move and he got a teaching job in St. Louis. Michael played with the popular Bob Kuban Band weekends. They played songs famous by Ray Charles and more rhythm and blues. Two saxophones played riffs in unison. Great music but it was boring for this musician who loved feeling his music.

So after playing the St. Louis establishments who closed at midnight, he packed his sax and went to the East Side St. Louis and played with black musicians.

One of the most cherished compliments in his memory was from one of those black musicians who said, “MAAAN, YOU play with SOULLL!” He played with soul with masters of soul…and they appreciated his talent.

You can download all 13 songs or any single song from his CD by going to our fundraiser page. For a donation of $9.99 you get all 13 songs. Single downloads are 99 cents each.

It is easy and it is only pennies per song which helps the pets we care for.

… Two dogs in the middle of a violent divorce: accepted by another rescue from St. Louis.

… Two grey and one black kitten, all long coats, age 10 weeks up for adoption.

… Chocolate Lab female, less than a year of age has Ehrlichia.