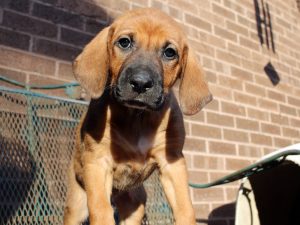 We have two Basset and Labrador mix male pups available. Both red sables with big bone but strong straight legs like a Lab. They are good-natured pups that should mature from 60 -80 pounds as adults. Call Marilyn to adopt at 573-722-3035. Adoption fee is $250 and we pay for the remaining two pup shots and rabies as well as neuter if done in Marble Hill.

This week I am sharing the stats, the facts, about the intake animals for 2017. This is our annual report to inform our readers, our county community, what we did well and not so well in 2017.

This report should help us all to do better as a community in 2018. I am confident that past reports have served us well to see what is really happening in Bollinger County.

The total intake of animals for the Bollinger County Stray Project in 2017 was 154 animals, down from 2016 which was 239. That means we were DOWN 85 animals.

We had fewer litters of pups this year because we simply did not have isolation kennel space for them, but also we received fewer calls asking us to take pups. Part of the reason is that folks are giving away on FB or selling mixes on FB, not screening the callers to assure the pups go to good homes. Eventually many of them will have unwanted babies.

We took in and adopted out eight litters of puppies, from 2 to 8 per litter.

Five more pups, from age 7-8 weeks to 3 months old were found as strays, dumped to die if not found. One of those litters had three pups, the other three were single pups one of them dumped in the country. The other two dumped in Marble Hill city limits.

The three dumped in the country were from the Sikeston area, also dumped with an adult terrier that has been adopted by vet tech Becca McCormick. That adult also had Heartworms and has been treated. One of the pups dumped with her died in my care of a severe whipworm infestation, dying in a puddle of blood after being dewormed.

On a personal level, that was the most horrifying day here. I pride myself on knowing a dog has an ER situation. Finding her like that will never leave my mind.

Besides water and food, de-worming baby pups is as necessary as flea protection.

Several dogs that we admitted turned their bath water red from the dried blood from flea bites on their bodies. Imagine the pain and discomfort those pups and dogs suffered. Also those babies and adults are often anemic, requiring B-12 and Iron shots.

Most of the pups moved to other rescues were not part of our official stats. One of those litters from the Patton area were Beagle mixes. Several pups and three adults left with a St. Louis area group. Turned out they had distemper. All that did not die before they got to the vet were euthanized. Those dogs were so flea covered that the other rescue and I could see in the photos they were in trouble.

Those were the only distemper dogs I had anything to do with in 2017. I was told about two other cases of raccoons with distemper however. (Please vaccinate!)

We were not called about any rabies cases last year

Eight other rescues took dogs and pups we had not vetted or claimed in our stats.

Two dogs were transferred or adopted to or through organizations to be PTSD and Service Dogs for veterans. One of those was Wheeler Dealer, a Great Pyrenees mix. The other was a purebred German Shepherd dog, former stray.

Of great concern were the number of dogs positive for heartworm. 19% of the intake of dogs had Heartworm (HW) in 2017, a total of 28 dogs.

Four were dying of HW and were euthanized

Thank God several rescues helped and took six of them. Adopters or owners treated four of them. Another two were tested by us before they were spayed on the Sidewalk Angel’s Foundation grant. I tested them because I was concerned they might die in surgery and wanted the families to know the condition of their pets [because they did not use prevention].

The high number of HW positive dogs is the main reason our intake numbers are so small in 2017.

We also took down two small pens after cutting down a major shade tree. I won’t put dogs in the sun without adequate shade in SEMissouri.

HW positive dogs are very expensive. They also take at least five months to treat to make adoptable. Most folk do not want to adopt them. On top of that with so many HW positive dogs here long term, we did not have kennel space for new intakes. Also most calls with strays were with male dogs and we can’t pile a bunch of males in our pens and hope for harmony.

We treat several dogs at a time so we can use every drop of the expensive medication. By treating a group, our HW vet gives us a discount on the office call too. We do not treat in the hottest part of the summer due to the stress of the treatment.

We saw a rise in tick disease too. 21 dogs, 14%, were diagnosed and treated with Minocycline or Doxycline for 28 days. There was a case or two of Lymes, but most had Erhlichia. Like HW expenses, tick treatment costs add up against our bottom line.

As stated earlier four HW positive dogs were euthanized. We euthanized dogs severely injured on the highway. Two dogs died here while in my care. One was an elderly German Shepherd with severe back and hip arthritis. The other was the Sikeston area pup with severe whipworms mentioned above.

A heartbreaking case was a puppy born here which I had to tube feed from birth. She was extra large and a breach, also first born. Turned out she had a cleft palette and a soft spot on the brain.

The case that angered me the most that was euthanized was an elderly stray dog that was very sick and found by a sweet family in Marble Hill. It had a huge tumor on the rectum, fur so stinky and matted…a disgusting situation.

Two dogs were euthanized for severe human and or dog aggression.

A highlight in 2017 was that McMuffin, the former feral dog running the streets of Marble Hill, was adopted to a Cape Girardeau family.

To sum up 2017, this report shows that we need to do better as pet owners in 2018 by taking Heartworm prevention serious. Also to use tick preventatives like the SERESTO Collar and spraying our yard areas will help to control tics and fleas. We/ve experienced a huge difference here on our property by spraying the yard.

I have seen a large reduction in calls asking us to take puppies or litters of kittens and pregnant cats. We even saw a slower request for use of the Grant fund in 2017. I hope that means many more pet owners have spayed their pets: a positive plan in action.

We will continue our personal dog story next week.