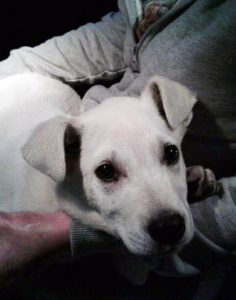 This white puppy was found east of Arab about a mile or so. This pup is around 9-10 weeks of age and resembles a Husky or White German Shepherd Dog mix. No one has responded to his post on FB so he is up for adoption for $250 which includes his three puppy shots, rabies shot, deworm, and neuter a the Bollinger County Veterinary Service. Call Marilyn to adopt at 573-722-3035.

Last week we learned that the Pit Bull breed is responsible for 76% of recorded fatalities in the last 11 years and that Rotweillers were in second place.

You learned I am against breed bans, but that I think owners of these breeds should be well informed, including of this information and take extra steps to manage their pets not only to keep their pets safe, but their own family members, neighbors and other citizens.

Recently I had a visitor who brought us two abandoned puppies which looked like Pit mixes. In their vehicle were two young adult Pit Bulls.

The family loved the affectionate puppies. “We talked about keeping them,” she said. Her husband said, “We just don’t have the time for two more large dogs.”

I looked at their adult dogs and said, “Your dogs are Pit’s right? What sex and how old are they?”

The alpha female was 8-9 months old; the male was age 2 and mellow. So I decided to give them advice, and fortunately they were open minded and an attentive audience.

“Did you know Pits are best in a home with no other dog or only one other dog of the opposite sex? Did you know that spay and neuter can help curb aggression between dogs but also may not? Did you know that your female will feel more like a woman at age 12 to 18 months old and that you may see the confidence in hard play turn to an altercation if one play bites to hard?” I asked.

They were surprised to learn they were not generally a “pack animal” breed: that they should not add another dog to the mix. They did not know about alpha management either or how to watch for behavior changes that could require more management.

I suggested that I would not leave them both alone and for sure not give them real bones or rawhides while loose together. In fact, I don’t ever suggest those “gold bar standard” treats with multiple dog homes because of potential jealousy or possession issues dogs have for such high value treats.

This well educated and successful family who loves their dogs had no idea how to manage them for a more successful dog “marriage”.

With the constant breeding of bully dogs, pure and mix breeds, and the small number of suitable homes to manage them properly, there are more homes owning them than ever before. There are also high kill numbers, with Bully breeds more apt to be euthanized in shelters than other breeds.

I believe the lack of understanding how to manage the breed and home owner insurance issues are why so many dogs end up in shelters. I believe the stubborn attitude of many owners who fail to “reason” and manage their pets (dog obedience or socializing them), or neutering or spaying when younger so they develop a testy attitude that are the fault, the cause this breed has developed a high death by mauling rate and high kill rates in shelters…

OF all dog breeds the Pit Bull is estimated to be only 6% of the total dog population. Yet 76% of the humans mauled –to-death by dogs in the last 11 years were by this breed.

Many attacks by Pit Bulls were called “unprovoked” by the owners. Saying the dog had no previous behaviors visible to explain the sudden attack. I would argue that the owners were ignorant or defiant to acknowledge aggressive tendencies in their dog.

As stated last week, Terriers THINK DIFFERENTLY than a hound dog, a Labrador, or other breed types. A pit is a giant terrier. Terriers were bred to get excited over movement and were expected to be brave while also strong and playful. They were bred to catch speeding rats, rodents, and high energy bulls. Today they are often mixed with Catahoula dogs for wild hog hunting: catch, hold, and be brave even if injured.

We recently took in a Catahoula which we are sure was mixed with Pit. He was a handful and another group agreed to take him. He became aggressive towards the other dogs in our rescue group. We know he had been chained which often increases aggressive tendencies in such dogs.

Chained dogs often feel teased. Your kids get to run, scream, tussle in the yard and that chained dog wishes it could also be part of the game. That reasoning probably explains why a Pit bull attack in Anchorage Alaska, June 24, 2015, was called unprovoked.

That dog was not chained. It was in the house. When the door was opened the dog rushed about 30 yards to a playground and attacked a 9-yr. old girl child, grabbing her by the head while she was playing.

Two large men rushed to pull the dog off. One had grabbed a crow bar and beat the dog until it let go of the child while the other man had grabbed the dog by the collar. The dog then attacked the men. A third man shot the dog in the head and the dog still did not drop but finally did die.

What caused that attack? I think first of all the dog was not obedient. Second the dog was excited by the action in the playground: movement. Third the child screamed which excited the dog even more… Who would not scream or fight back: both are behaviors that increase adrenaline and increase the ripping and tearing action seen with a dog killing vermin. Fourth the men beat on the dog in attempt to get it to let go. Some breed types are more apt to fight or attack more if beaten. They develop a thought process that they have to fight harder to survive and so can become more dangerous. I won’t recommend beating those dogs because like the above dog, it can turn on you and then what?

They shot the dog and it finally ran off and did die.

Dog fighters use what is called a breaking stick. The metal crow bar could have been jammed between the dog’s mouth. When you pull the bar back it forces the mouth open. I would never do that to a dog I did not know because once again, after getting the dog off the child it will likely turn on the person that jammed the mouth open. However the dog would not be beaten so who knows for sure.

What would I have done to that dog that was attacking the child? In my opinion the dog is ruined and needs to be put down. IF all I had for a weapon was the crow bar I would have jammed it down the dog’s throat as deep as I could have and as hard as I could have pushed causing as much damage internally as I could and force the dog to hopefully release while causing damage so the dog could not attack me.

The purpose of this article is not to gross you out. It is to give you knowledge should you witness a dog attack but more so to get all dog lovers to be responsible pet owners. When you have a dog with aggressive tendencies towards humans you either need to manage them or do the right thing and euthanize them, no matter what their breed type.

… Group of 11 pups from Puxico, group of 2 pups from north of Marble Hill

Adoptions, return to owner or placed in other rescues (16):

… Highway to Heaven: Yellow Lab female adopted by a family who drove here from Virginia