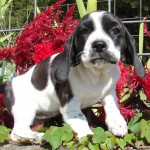 Hot Lips is half Cocker Spaniel and dad, we are unsure, but with her short lets and thick body, we think he was a Bassett mix. Hot Lips is one of three pups still up for adoption. Their fee is $250 which includes her spay and shots if done by one of our vets. Her litter was born late August. She should mature in the 20-25 pound range. Call Marilyn at 573-722-3035.

It was Friday night: the night before opening of firearms-deer hunting season.  Sherry Sullivan and her family had a busy evening planned.  Sherry left at around 5pm.  All five of their family dogs were home including Boodo, a hound, bird dog and Pit Bull mix male.  Sweet Boodo is age 7.

Ashley, Sherry’s daughter-in-law, with her daughter Chelsie, went to town at around 7:30 that evening.  They are neighbors to Sherry. They saw Boodo in Sherry’s yard.

Four families live close together on County Road 510, next to Sherry and Ashley.

They have five dogs between them, all are loose but one.  The dogs do what most Bollinger County dogs do: visit their close neighbors and hike in the woods.

Bollinger County is a dog’s paradise.  They generally don’t know or understand boundaries especially  when they get into the woods. They spot a bunny, a squirrel, or even a deer and a chase is likely. It’s a natural dog thing known as prey drive.  Few dogs don’t possess a desire to chase squeaky or flashy critters that run.  Chase is an inherent drive ingrained for survival.

No one knows for sure [yet] the exact time “it” happened, but Ashley’s crew left at about 7:30 that night and returned around8:30.  They parked their vehicle and walked up to the porch.  There they would get the shock-of-their-life!   Lying on a blanket was Boodo with an arrow stuck through his shoulder!

Chelsie, Ashley’s daughter, was the first to see Boodo.  I can’t imagine her firstthought, but I can imagine that she had a chill overcome her. 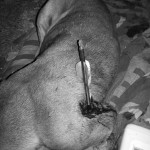 Who could do something like that to a dog?  Why would they shoot a family pet?

Set in his shoulder was an arrow, black with orange feathers.  The arrow was shot into his shoulder atan angle, as if the person with the bow was sitting up higher such as in a truck.   I believe they were aiming for the dog’s hind end as he was moving away from them, but they missed and went into the side of the front leg.  The bow just missed the elbow bone of the front shoulder and slid through muscle.

What kind of person does this?  Surely they are NOT a sports-man or woman.  I suspect my readers have a title for this person(s), most not fit for print.

Who finds pleasure in shooting a pet and in a manner it will suffer so greatly?

What kind of hunter kills other’s property for the thrill of a kill?  Maybe they just enjoy watching suffering…

My guess is that it was a young hunter, under age 30, maybe with a friend and a verbal bet, “Watch me shoot that dog [which mightbe a child’s pet].

What were they doing hunting at night, the night before gun season: two hours after dark?

Someone knows who did this.  Will they have the ethics to turn-in the owner of the black arrow with the orange feathers?

As if that was not enough tragedy and mean spirited sport, another family with small kids has three dogs.  One came home shot with a bullet. Later another arrived and the third dog is still missing.  What do you think happened to that dog?

Hunters concerned about dogs during the season need to talk to their owners. Owners need to protect their pets.  Dogs chasing deer can be reported tothe Conservation Department and don’t deserve your bullet or arrow.

The law is: do not shoot dogs that are not threatening your personal property (livestock, pets, or family).

I am a hunter and I find the stories of Boodo and the other dogs very troubling.  It makes all hunters look bad in the eyes of many, and in the eyes of the child whose dog did not return.  What do you suppose she thinks and feels right now?

… Black female that was PG is a Mountain Cur type, bobbed tail, who was bred by a white German Shepherd.  She had 7 babies one day after arriving here.  All survived.

… Purebred Cocker: mother of a litter we cared for, was signed over. GREAT dog!

… Seven Lab and Heeler mix pups: one was pet of the week last week: no calls so I transferred them to an Illinois rescue on Monday.