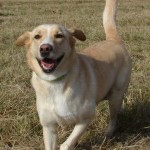 Maggie is a Yellow Lab and Husky mix who will be age 5 December 19. Her family had included three young children who loved to dress her up. One of the children was autistic. She was relinquished because she would wander the woods when let outside at her former rural home, making hunting difficult. This softy needs a home with a fenced in yard and to be a house dog which she is accustomed to. Call Marilyn at 573-722-3035 to adopt. Adopt for $100.

The call came Sunday, November 10, 2013, “We have a pregnant dog at our church.  Some of the members were talking about shooting her today.  We don’t know what to do with her.  Can you take this dog?”

“She is going to pop puppies any time,” Laura, the caller warned.

Laura and others at the church who had cared for the stray female had given her a name.  They called her Sadie.  Sadie was shy. She acted like she had been kicked away by a few shoes, or being asofty, a loud voice could have scared her.  Laura could not catch her on Sunday afternoon.

“Use a large wire dog crate, attach a lightweight rope to the door and bait the kennel with food from outside the door leading tothe back of the crate,” I instructed.

So the next day Laura did as suggested and hungry Sadie walked in. The door was slammed closed.  She was captured.

Sadie submitted.  They loaded her and she rode an hour to our home.  She arrived mid day. She had puked all the yummy chunks of hotdogs on the way thanks to her stress and these carnivalride type roads of Bollinger County.

I gently opened the door and gave her my hand to smell.  She showed no signs of wanting to attack, although she was truly worried, scared.   She allowed me to roll a martingale collar over her chiseled face and rest it around her neck.  No signs of out-of-control fear, so I opened the door slowly and started to rub her face, eyes and lips stretchedback towards her neck.  She liked that and turned her head to look at me for a moment.

That was her sign that she trusted me.   I consider that my “thank you” speak from a dog.   Look briefly at me without the whites of the eyes showing, then to turn her headaway in submission.

I bent in the large crate door and removed her, then carried her to her bleached and scrubbed kennel.  There I examined her and told Laura,” This gal has at least a week until whelping.  Her bags are far from full and she has no swelling around her tail.

The next day I walked out at noon to clean kennels.  When I looked in her kennel there she was, trotting in a circle, chasing a puppy that was hanging byit’s umbilical cord, and flying like a ride at a carnival.  I had been mistaken with my date of birth estimate and it was not the first time.

She was having trouble with the birth.  Her lack of regular and good nutrition may have contributed to her problems delivering, her first three being theworst until pup 6.

Thirty minutes of rest, then 30 minutes of labor. I ran to the house to consult with one of our vets.  When I returned she had popped two more pups: a large dark female, which she was attending to and in the corner laid a dead puppy, mostlywhite with beautiful black markings.

I picked her up and she was already chilled.  She was wet.  Mom had cleaned her from the sack even chewed her cord, but she was so wet, probably drowned.

In a panic state I grabbed her by the hind legs and gently shook her up-down, up-down.  Fluid ran out of her mouth, some from her nose.  Then I started chest pumping like I had watched on TV.

Something deep inside me kicked in that I can’t explain: a mother instinct, my childhood desire to be a vet, maybe just thefrenzy of the moment.  I took another clean warm towel from the cooler with a hot water bottle, wiped thebaby as dry as I could around her face, opened her mouth to dab it dry and I started Mouth to mouth recitation: the old fashion CPR method.

After several breaths and more chest massage, she gasped for air.  OH how I wish I could have seen my face.  I was shocked that the cold body had breathed.  But was it just a reflex?  No more movement, no more breaths.  So I breathed into lifeless body again.  More gasps but again it stopped.  I used a tool and sucked her mouth and nose, did another series of breaths and she came to life!

She was alive and I could not believe my eyes, but had I made a mistake?  Would she have brain damage?  Was her labored breathing going to be the death of her: a prelude to phenomena?

I laid her in the cooler, wrapped in a clean towel and laid her over the hot water bottle so she could thaw at a reasonable pace.

Again I ran to the house to call the vet.  Keep her warm, use a hand suction tool doctors use for human babies [which I had in my vet box] and then if she isstill breathing hard, leave her alone.  She had a 50% chance of survival.

So I found the blue bulb suction tool, ran to the kennel and as the little girl opened her mouth to gasp, I stuck the pinchedtool down her tiny throat.  Release the bulb and it sucked up fluid.  Emptied it and did it again. Then I cleared her nostrils.

She immediately started to breath normally.

Her body was warming but she was still a little cool.  So I laid her to rest for about five more minutes, unwrapped her and placed her to her mother’sbreast.  She went straight for the nipple unlike any of her other siblings.

Today she is one of the strongest in her litter. In fact at three days of age she lifted her head and barked as mom walked backinto the dog house to feed.  Her nose kicked in a warning that food was near.

Being a church mom, we have named the pups heavenly titles.  She is Amazing Gracie.  Siblings are Preacher, Deacon, Church Bell, Father Witt (Father from St. Louis who has adopted twodogs from us), Pastor Wallace (my minister during my high school years) and Laura May who is named after the lady who really saved this litter and their mother.

Pictures of Amazing Gracie and her siblings.

… Chocolate Lab mix and eleven 3-week old pups.  Will b ready for Christmas.

… Blue Pit male, near Palmore Church, matched him found to his family in 24 hours. He was about 4-5 miles away. Endedup at a relatives home who did not recognize him.

We had 47 dogs on our property Monday, expecting 12 more Tuesday. .