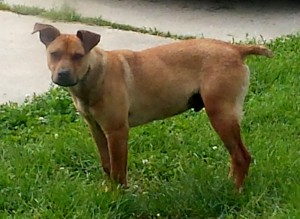 Pet of the Week:  May 15 this young male showed up at a resident who lives on Opossum Creek Rd and has not left. I believe it was the same dog I saw running wild in Marble Hill a couple weeks earlier. It is illegal to have your dog running at large in city limits. To claim this dog or adopt this guy who appears to be a sweet dog, call 573-722-3035

Last week I mentioned three 2-yr-old dogs who have been with us for over 18 months. They are runners who won’t stay on their property.

I said that I still had them because it was important that their new owner live in a city and respect the leash laws orhave a secure fenced yard with electric fencing as they will go over or under a normal dog fence.

The angels must have felt my sad heart about these three fine dogs. I received a call from a single gal in St. Louis, a runner,who was looking for a large breed dog. She wanted to adopt KAT, the tan and black masked female.

Monica adopted KAT on Saturday afternoon. Monday I received an email stating that Monica loved her so much and that KAT was doing great, adjusting to her new surroundings and lifestyle as a pampered indoor dog.

The angels blessed us with another adoption of a little Pit mix pup who was a stray in the Wappapello area over two months ago.This little dog was WILD and somewhat dog aggressive when first brought here.  He was so small I thought he was two months younger than he was. I believe LYLEE PAD is probably a BostonTerrier and Pit mix. His red brindle coat and black mask, then sporting those upright ears: Lylee looked like a Hyena.

A senior from a Utah college who is a soccer jock called for him several weeks ago. She had misunderstood that his adoption feeand shipping fee were two separate expenses and when he was to be shipped the adoption was canceled. 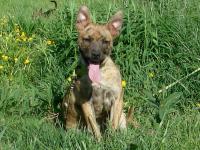 I took part of the blame as I had not sent a message laying expenses out like an invoice.

The adoption of Lylee Pad was a very big deal. His probable pit heritage means he would sit here for months to years to beadopted. His high energy was a concern. He had a limp from a previous broken leg, probably kicked by a human before being dumped. This guy was a handful until he was neutered.

I was under the impression this pup was a small baby, and after a couple of weeks in isolation, his adult teeth started to growin. When taken in for his second round of shots and to have his leg injury radiographed to determine soundness an athlete, I was told he was about 4.5 months of ageand old enough to be neutered.

His neuter changed his aggressive nature to a mellow fellow in short order. I was able to let him out with the pack and not worry.He became submissive to the pack and stopped being wiggly when I wanted to hold and love on him.

For the most part he became a well-mannered little angel. I posted two photos of Lylee Pad on our FB site. One is of him lyingbeside his new big brother, an older Golden Retriever.

So after his adoption was canceled, the following week the college student’s mom called me saying they wanted to adopt and fly Lylee Pad to San Francisco California, where Kelsey would be during the summer. He would be her birthday present.

A little Pit mix flown all the way to California when I can’t normally get them adopted here in Missouri: amazing…

This adoption was very time consuming. Earlier Mom had asked for references about me and my ability to match pet to owner as wellas my honesty. She wanted a couple, but I sent her ten recent long distance adoptions including one in Des Moines Iowa who adopted a very difficult dognamed Frenchie.

Reading the reference comments made me tear-up. They were so kind and a lot of time and thought was put into them.

We had many calls last week for the pups and dogs in our care. Many did not care how far they would have to drive or the costincluding shipping. They trusted us. We appreciated them for calling us, for choosing our dogs.

The pups are the faster movers, and colorful pups are generally adopted quickly, helping to pay for the vetting and care of theolder dogs.

Our litter of black German Shepherd and Lab mix babies had only one call which fizzled. I mentioned them to several callers with no interest because they were black.

We’ve had several calls for the yellow pups we just accepted as fosters, trying to first find their owners. If no one comes forwardto claim, they will be gone by the weekend. When I mentioned the four remaining German Shepherd mix pups to a teacher from Central Illinois  who called, she was very interested in adopting two of them.

Maybe some more prayers will be answered by next week’s Stray Report.

Another prayer that needs to be answered: we need help transporting Brodie, a 4-year-old Pointer male, to Paducah next Saturdayearly morning. He has just completed his HW treatment. If you are willing to help please call 573-722-3035. He will be traveling to Virginia.  If you can drive him farther let me know.  His trip is posted on our FB page.

… Brother to above pups, Odie Hawthoren: flying to CT Friday.

… Arbor Lane: 2 year old Beagle, one of five rescued last fall, she developed symptoms of Heartworm (HW) after first showing negative on theoriginal test. HW will not show up on a test until a certain age of development. Treated and adopted for only $150, well over $400 invested in thisgal to save her.

… Thank you to the Angels watching over us for bringing Monica here to pick up KAT, the Catahoula mix 2-year-old female. See this week’s story abouther adoption.

… FOUND 5/13/14 County line on Highway 91 north of Advance: two pups, Yellow Lab possibly mixed with Golden Retriever, found during a rain storm the 13th, not claimed and will be up for adoption by the 23rd. Already have callers to adopt.

… Black young active dog with white on tip tail and toes. So energetic and at the home of an 80 plus old lady who is on an oxygen machine. Dog iswearing a collar and flea collar. Sex unknown: so wild that caretaker could not determine its sex.

… Zalma, litter of 5 pups age 8-wks and their hound mix mother: talking to an Illinois rescue to take them all.

Stray Project monetary donations accepted at the Marble Hill Coop. We purchase de-wormer and other supplies at the Coop anddonations are greatly appreciated.

Offer a stray water on day one and food day two or three. Call if missing a dog or if you have a stray. We don’t alwayshave room but we may have a solution to help you and the stray.

Flea and tick season is just around the corner. Mosquitoes will be as dangerous as ever for your pets. Mosquitoes carryheartworm. Did you know one mosquito can lay over 30 eggs in just one bite to your dog or cat?

Please do the following when your pets are expecting or caring for a litter: offer any pregnant dog small-breed-puppy-foodthe final 1-2 weeks before delivery and while the pups are nursing. Give those mothers all the food they want: bowls full all day and lots of fresh wateravailable all day.   Cats need kitten food.  Free feed the higher calorie food during the nursing stage to help mom make milk and maintainher own body mass.  Babies need to be de-wormed as young as 1-2 weeks, then every 7-10 days until age 10-weeks orolder if in a confined environment with re-infestation concerns.

We LOVE Buchheits!  Donate a buck or more at the Jackson store for dog food and supplies when you shop. Also, Second Time Around in Marble Hill is takingdonations for the Stray Project. Monetary donations are accepted at the Bollinger County Veterinary Service, Marble Hill Coop, Buchheits, and the MHTown and Country.