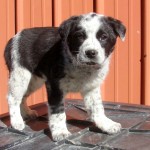 Meet Merle Lee Haggard, an alpha female Heeler and Border Collie mix. Our Report story last week was about her mother and siblings. Her brother Haggard Haggard was adopted on Sunday. She also has a submissive sister who is very loving but not a tough dog named Pearl Lee Haggard. They are from the MAMA TRIED litter. Merle Lee is somewhat reserved and will need a family who understands the breed and does not encourage human aggression, since she is somewhat reserved. She should make a strong watch dog who would not allow strangers on the property. Call Marilyn at 573-722-3035 to adopt for $200 including her three puppy shots, rabies and spay.It is beginning to sound like a broken record: two more return to owners this week. The unusual is becoming habit, of which we are thrilled. 10 returned in 2014. However, one of these returns is much different than any of our others.

It is beginning to sound like a broken record: two more return to owners this week. The unusual is becoming habit, of which we are thrilled. 10 returned in 2014. However, one of these returns is much different than any of our others.

One of this week’s return dogs was shot three times. She her on our FB page.

Her name is Cotton. She is an elderly female German Shepherd, sable in color with grey covering her jaw. Aging evident in her movement and posture.

Cotton has been owned by the same family since she was a baby taken from her mother. Although Dalton called me, Cotton was his mother’s dog.

The tele rang at 10:30 that night and I was angry as I walked to pick up the phone. “Who calls at this hour of the night,” I said to my husband.

“I believe you have my German Shepherd,” Dalton said. “She has been missing this evening. She is my mother’s dog and is very special to her.”

Dalton described her and her collar. This dog that we had felt was at least age 10 was actually between 12 to 14.

We would learn that she lived only a few hundred yards from the porch where she had laid wounded.

“She never wanders,” he said. “She stays on our porch. The porch you found her is our former ranch and that porch is where she grew up.”

Dalton found his missing pet through our Facebook posting. I posted her in the 6 PM hour and after 10 PM Dalton was notified by a relative that a dog that looked like Cotton, from the same area had been found shot. Dalton recognized his family’s dog and the match made.

So what happened to Cotton? How did she end up with two close holes in her right front shoulder and another nick to her tail? One of those shots had cut her skin open over an inch wide, a deep hole in her flesh. That shot went straight through her leg, just missing her chest: heart area.

The second shot was about 2.5’ to 3” spread closer to her chest with no exit hole.

It was as if she were stopping and going potty to have two shots so close to the same area: possibly two shooters or an automatic was used.

Cotton’s family lives on Co Rd 808, along DD. I think it is possible that this dog who does not wander, was going potty along the ditch of DD, among the tree line. Most large breed female dogs eliminate away from their yard and many like tall grass.

She is black Lab and Border Collie mix, shot twice, shattering her hind right leg and the second shot went through her left foot. It is possible one shot hit both her leg and foot.

If you know the answers to any of the above questions please contact me (Marilyn at 573-722-3035). I will keep your contact information confidential.

In 1996, when Michael and I were shopping for property to purchase for our Missouri home, a male realtor drove our realtor and me around the Perryville and Swedgewickville area looking at rural homes.

He spotted two dogs playing in a pasture with a large herd of cattle, pulled over and pulled out a loaded rifle that had been prompted up between the footboard and door in the back seat, next to me. He stood on the road ready to shoot the two dogs (who probably belonged to the rancher who owned to cattle and land).

I had more than a few choice words for him and shouted them like a nut (sure he thought I was a nut). Our exchange was not pleasant. He did not know the owner, did not know the dogs and did not have any right to attempt to shoot dogs, probably pets, of the land owner.

Myself, being a proud handgun and rifle owner, I find people who target practice on pets to be beyond vicious and hostile. What if that dog belonged to your kid and someone else did that to your dog? What about the pain you inflicted to that cherished pet?

What kind of man or woman is it that enjoys this type of hostile behavior?

… 6 of a litter of 8 black medium sized breed mix puppies. Look to me like Jack Russell or Feist mixes: long nose, Jack Russell type ears, all are solid or almost solid black. Dumped in Puxico at 4 weeks of age.

… Fifth Great Dane Pyrenees pup, female “Speedo” adopted by Millersville family: she a librarian, he works on the river.

… Sixth and last sibling to above pup, female ”Tornado” adopted by O’Fallon family.

… Tucker: Mahogany and black Doberman male, age 1, foster to adopt by my Zalma neighbors, volunteers of the Project who also live in St. Louis.

… Lucky Stripe flown by private pilot from Memphis to Memphis: met a ground transport that took him to Pittsburg PA area rescue Saturday.

… Haggard Haggard: 9-week old Border Collie and Heeler (or was his dad a Lab), tri-color, adopted by wife of employee at Pavestone Company Scott City, Mo. 1st of 3 pups.

… Needs to re-home: blk male, neutered, Lab mix, and a female blk Golden Retriever and Coohhound mix female not spayed. Dogs good with her two rats and cat. Marion IL caller has been watching our FB site and wanted us to take her pets.  Parent died and she must move to government housing situation.

… 4 Chihuahua and Min Pin baby puppies, also three 9-month old Chihuahua Italian Greyhound type mix dogs. Have found a rescue to take them and hope to move them this week.