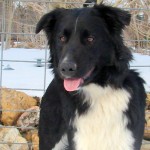 The Border Collie was originally called the “Scotch Sheep Dog” and originated in Northumberland along the borders of Scotland and England. Celebrating St. Patrick’s Day, this is the breed from that region of the world we have focused on to help celebrate the Lucky Leprechaun spirit! This beautiful dog is one of five Border Collie mixes in our rescue up for adoption. Mr. Malone has amazing conformation and is a beauty to behold. He likes the taste of fresh chicken, so he is best as a companion with a fenced-in-yard and as a pet. This half Labrador also has a history of running amuck. Call Marilyn at 573-722-3035 to adopt this young male, just turning 1-year of age.

I dedicate my volunteerism this week in memory of my mother, Dorothy Rose Dauner Olson. She died March 20, 2008. It still seems like it was yesterday that we lost her. She encouraged me to embrace the volunteer spirit. Thanks Mom…

We were part of another return-to-owner this week. A stray male Bassett, red and white in color, was sighted by a family driving on Highway N, about 2 miles from the junction of Highway 19/ 51. The male had been missing about a month or more. He was very thin. He was returned because of our Facebook (FB) listing. Thank you to the Vilia’s for stepping up for this stray. He was return #8 for 2014.

Fitting in with the memory of my sweet mother, this week’s story is about another special mother.

We had an unusual call last week from Scott Lindsey concerning a feral mother dog, who it turns out, is not really feral in temperament, just cautious and shy. Typically a feral animal is wild and can be very dangerous when cornered or trapped.

Scott and Sharon Lindsey, from the Sedgewickville area, had seen this female for at least two to three years.  She looks, moves, and she herds their horses like a Border Collie. She would present herself but no one could catch her. You’d think she would be skin on bones if a “wild dog” but according to Sharon, she generally looks pretty good.

She had a litter of three pups which were fathered by their Heeler and it seems another dog worked his way into the picture.  Sharon remembers the courtship date well.  It was when their male was torn up by another male, suffering a harsh wound to the face that required vetting.

The date of the vet bill would allow us to calculate the litter’s date of birth: approximately 63 days after the dog altercation the pups would be born. That means they would be 8-weeks of age.

“How did this dog keep from starving all these years,” I asked Sharon.

Sharon explained that the area ranchers were missing their poultry and in fact, between the dogs, owls, coons and opossums; they had given up on raising poultry.  This beautiful lady also stole protein rich cat food from the food bowls on Sharon’s sister’s porch.

Mrs. Friese, another neighbor and the lady who initially told me about this litter, would leave food at the Sergeant’s Chapel Church Cemetery every morning that she drove to work. Among the graves stands a big old cedar tree where this gal would find her bowl of golden manna.

Amazingly the Border Collie had not been shot or succumbed to starvation, intestinal parasites or fleas especially when nursing.

“She is a survivor,” Sharon said. “We think she would kill and bring back food to the den for the pups. Right now she has a dead skunk next to the den where she raised her pups…she manages to survive.”

Indeed, she managed to survive, as a thief, a poultry hunter, and as a varmint killer.  Also she survived by the superlative hearts of those in the neighborhood who would offer her kibble on a regular basis.

The Good Samaritans had seen her try to raise another litter about a year ago.  They were unsure what had happened to them.  They were whelped under the large root of a fallen tree. There she dug a burrow like a fox or coyote would.

The recent litter was whelped underneath one of the Lindsey’s out buildings.  They had watched the collie care for her litter and kept her fed with kibble. More kibble was offered when the pups were old enough to chew it.

No matter how kind the Lindsey’s were, the mother dog and her pups would not be caught. So a friend brought his coyote live-trap and it was set using bacon and yummy liverwurst. The potent smells are hard for any meat eating critter to resist. Soon all were captured.

In just a few days the mother dog had totally submitted to the Lindsey family.  By the weekend she lay in their heated shed allowing all the family members to approach her and she readily accepted their affections.

Monday, March 17 the litter was dropped off at the Marble Hill vet office to receive their shots and exams. I picked them up in the early afternoon. I believe they will be up for adoption in about a week or so.

What is mom’s fate? Well the Lindsey’s have grown very fond of her. They are going to give her time to see if she will accept them as “her own” and commit fully to their love and generous care.

… Holly Hunter: former pet of the week, white to tan pup with mange, dumped in Zalma.

… Two stray yellow pups dumped and laying in a huddle along a gravel road in rural Patton: sick. Taken straight to the vet and euthanized due to Parvo. They weighed about 2 pounds. Breed type unknown, but they looked like Chihuahua and Lab mixes with large pretty heads. They were our first Parvo case this season.

… 12-wk-old black female Pit and an 18-mo-old white and red male: owner lost her home, no car or phone to help these dogs, unsure their fate.