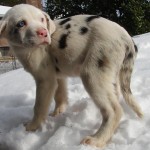 Four pups were found on County Road H, just a mile or two from the junction of 51. They were found close to an abandoned farmhouse. It was dark and they are lucky to have survived the dangerous road in the dark, being severely starved, and they were dehydrated. Two, like this male pup, have blue eyes. One is a hefty red and white female with long ears and is either a sister or from a second litter of the same age range. Another has a long coat of many colors, a chocolate merle. I think this litter could be an Australian Shepherd and Catahoula mix with a bit of hound tossed in for BC measure. If not claimed they will be up for adoption. Call Marilyn to claim or adopt at 573-722-3035.

Last week I wrote about the Boxer in Perryville County that froze-to-death.  You may remember that the dog had no layer of fat, skin stuck to bone, and bone grossly protruding from the cold body.  The dog had a box without adequate bedding for any dog in the weather we were experiencing.

A female Chocolate Labrador that looked pure was also on the property.  She looked well fed in her rounded frame and was happy in her double and medium length coat.

Turned out the two dogs had two different female owners.  One has to wonder why the Lab’s owner tolerated the care given to the Boxer.

The Lab was removed from the property by Rough Roads Rescue.  They hoped to re-home her to a family that gave-a-care about animal welfare.

Charges have been filed against the Boxer’s owner.

No charges have been filed for animal neglect against the Lab owner, although rumor is that both dogs were left without adequate accommodations or food.  Allegedly neighbors were left to care for the dogs (on their own accord) and officials had been contacted about the animal neglect in recent days.  I don’t know if the officials were ever on the property to evaluate the extent of neglect while the Boxer was still alive.

Now the public is furious.  So am I.

Some have organized a petition wanting punishment for both people.

Lessons are obvious in this case.

First you, as concerned citizens, must report when they see neglected children or elder abuse: lacking basic care to survive and flourish.  I put the needs of people above that of animals.  However, I personally expect the poor or disabled to ask for help when they can’t care for their pets and livestock.  You don’t ask for help and your critters suffer, then you may deserve prosecution by the law.   Don’t let “poor” be your excuse.

Secondly, law enforcement needs to take animal abuse or neglect serious.  There is little time for skinny, sick, or single coated creatures when neglect or abuse is reported.  When the call comes in, you need to react: sometimes the same day.  It depends on how serious the weather and animal’s condition is.  I might not be able to take that dog that day, but we can work together to find a source and we have paid board at the local veterinary offices when we had to struggle to make room for needy dogs.  The public may not know that the Humane Society of Missouri, in St. Louis, takes most of the animals the our Sheriff’s department assists.

Third and very important: when you call in a complaint ask the law agency to assign an officer who will be your contact regarding the abuse.  Ask that officer to contact you when they have seen the alleged abuse/neglect and to assure you that the situation is being properly taken care of.  Ask them when it will be that they investigate and when you can expect to be called back.

Law agencies can obligate animal owners to get veterinary care when needed.

If you don’t want to use your name to file a complaint, call me at 573-722-3035 and I will do the footwork.  Then call me back to see if anyone has taken charge to investigate the reason for your call.  I am so busy I need your return call.

December, about three years ago, a German Shepherd breeder starved their dogs so badly they were near death.  A caller witnessed their neglect and called us. I called the Sheriff’s department.  That same day we went to the property and most of the dogs were pulled.  They were boarded for several days in the warm and protected vet’s office and their condition tightly monitored.  A German Shepherd rescue took two of them for us and when they were ready, were adopted.  As I recall the elderly male was in bad shape and had to be euthanized.  One dog was returned.

Their case went to court.  The dogs were in such poor shape due to intense worm infestation, lack of food and lack of water.  Don’t think snow or ice in the water bucket is enough to water your animals.

If I had my way, when such blatant neglect occurs the pet owners should loose the right to own pets or livestock.  Want them to keep a pet, for their mental health?  Then insist in the judgment that they can have only one altered pet and that it is to see the vet twice a year for a “check-up.”  If it is a dog, have them keep that pet’s shots up to date and be kept on Heartworm / flea prevention.  Those are the basics along with food, water, and respectable shelter.

Friday night after 5:00pm, it was dark.  A Good Samaritan almost hit 4 starved and dehydrated puppies on Highway H, about a mile or more from the junction of 51.  They look to be age 8-10 weeks.  Did someone dump them at the abandoned farm house near where found or did they wander off following their mother, lagging behind, getting tired then lost?   Was this abuse or circumstances of a trip with mom gone bad? If these pups are yours you call me to get them back or release them to be adopted.

See all their pictures on our FB site.

… Precious: One of two black Golden Retriever mix pups fostered by Bill Minter, went to the GM of a Scott City business as a surprise Christmas present for his children.  A neighbor is taking care of her!!!

… Cocoa: one of 11 pups from Weimaraner Lab mix, going to St. Louis when old enough to be a therapy dog.

… We have contacted an Illinois rescue asking them to help with two litters of pups.

… FREE: Project cat and kittens, fully vetted (includes spayed) house trained tortoise grey/orange/cream mother cat and her remaining 4-month old kittens which are Russian Blue: one male and three girls.  Their foster was allergic and they had to be removed.  They are currently being boarded at the MH vet and are free.  Adopter must agree to spay or neuter the kittens when of age:  See FB. Call 573-722-3035

… LOST 12/5/13 near Advance funeral home: Blue Heeler male, about 12 weeks of age, may be a mix, but looks pure, black-white with red on his legs. Kid’s dog and a reward.

We are caring for 72 dogs and pups, a record number on the Neville’s property.

Please look at our FB site to read about winterizing made easy. Don’t turn your back on family or friend’s pets that are suffering.

Remember us when you write your monetary donations for 2013.  Ask us for a receipt if you would like to write your donations off your taxes.

Thank you for your support.