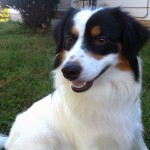 Pet of the Week – This beautiful dog’s owner could not care for his two dogs any longer due to an illness.
This male is now neutered, Heartworm negative, and shots up to date. He is age 2-3, good with kids and other dogs. Call Marilyn at 573-722-3035 to adopt.

Five beagles were dumped in a remote farming area near Arbor of Stoddard County.  They were displaced together, one suffering from an infected dog bite around her tiny neck, grey in color because of the filth on her little tri-color, freckled body, severely starved because the injury on her neck was so infected she had trouble eating.  She was also stage three Heartworm positive, loaded with microflora to the point that any treatment would have killed her.

We never tested her for intestinal parasites, but the other dogs with her showed a high volume of whip and hook worms, which were draining most of any nutrition the dogs gathered in their stomachs.
They were all crawling with hundreds of fleas.  Imagine how miserable they were.

What kind of person would do that to her and her pack of probable off-string?

With that 4-5 year old injured gal was a 12-18 month old pregnant miniature female, wearing a white fur coat with a few patches of red about the size of a golf ball or smaller.  Another female, almost a twin, looked like she had recently been bred. They were with two same age males who weighed 14 and 19 pounds.

A Beagle Rescue from Colorado agreed to help us with the dogs.  They needed to be Heartworm negative so all were taken in to be tested.

The pregnant miniature gal was also stage 3 and loaded with microflora.  Just giving birth would probably kill her so I made the decision to euthanize her and was thankful I had not given her a name.  She was already bagging with milk.

I will say it again: what kind of person would dump these dogs [in a remote farming area to fend on their own]? What kind of person “raises/ breeds” dogs and does not give them the “basic care” of regular de-worming and heartworm prevention?

Oddly, the two males and the other female were all Heartworm negative.

I wonder if their owner died and a relative dumped them rather than take them to a shelter or take the time to find them a home.  All the Beagles were timid, obviously not well socialized to strangers, yet sweet / submissive towards humans once captured.

It took Karen Sanders and I a total of seven trips to catch and trap the five dogs and hours of our time.  Once Karen saw the sick, older female she could not rest until the dog was captured, which did not happen until the 7th trip.

She had laid hiding in the weed covered drainage ditch, drenched by a couple different days of rain before she was finally given canned food, a flea bath, iron shot, B-12 shot, and was dewormed. That night she was also given love and a warm bed with a hot water bottle and a doggy jacket to stop her shaking.  The next day I would put-her-down…

The two males were shipped to Colorado on Saturday where homes already were eager to meet them.  The remaining female is with foster volunteer Karen.

It was a busy week for us regarding starved dogs in the Advance, Stoddard County area. A call came in from a donor friend.  A male Great Dane was in their yard for over a week, trying to mate a mix breed black Lab belonging to their neighbor.  The Dane was very thin.  So was the neighbor’s dog who had just had another mutt litter which was weaned a few months earlier.

I had a foster for the Dane and picked him up.  He had been a stray and no one had called any of the area veterinary offices or us.  HE was posted on FB and his owner called the foster family with proof that he was their dog.

This Dane was found over 3 miles south of Advance in a farming area.  His owners live in the Patton area, about an hour away.

If you know who in the Advance area had acquired a black male Great Dane sometime since August of this year please contact us.

This dog is now early stage-two-positive for heartworm.

This dog was another reason to microchip your pets. You can prove a dog belongs to you when chipped.

Thank you to all the families who help the strays find their owners or in other ways.

Adoptions, return to owner or placed in other rescues (8):
… Sandy Darling Kitten: went to Arnold MO retired teacher.
… Molly Bea’s first of 9 pups, adopted by a Rolla MO college Student already working as an engineer and making enough money to purchase a Corgi Lab mix pup and pay his college tuition. I wish I was half as smart as he is!  What a fine young man!
… Stray male Heeler mix found 10/4/13 Millersville/Scopus area, Co Rd 226/Hwy 72: taken to Cape Humane Society. We do not accept Heeler mix adults.
… Great Dane in this week’s story was returned to owner
… Two male Beagles from this weeks story, went to Colorado Beagle Rescue.
… Pepper Jack, Black Lab and possible Chow mix went to a fire fighter in Chicago.
… KIT KAT, one of 5 dumped Rat Terrier pups was adopted by a Chicago family.

Dogs with Heartworm, Erlichia, special needs, or that were euthanized:
… Two of the five beagle dogs we rescued where stage 3 Heartworm positive and euthanized.
… Walker Coonhound found two weeks ago: stage 2 HW positive.  Owner has not come forward to claim this two year old male.  We are not accepting this dog into the project.  No rescue has stepped forward to take him.
… Great Dane male: age 18 months, severely underweight weighing 109 pounds and should have weighed an additional 20 – 30 pounds.
… Chocolate Lab returned to owner last week was Heartworm Positive stage 2.

Miscellaneous and contact info:
We had 45 dogs on our property Monday. 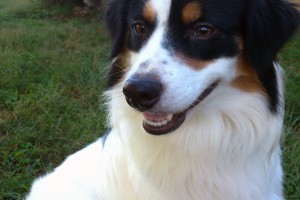 This beautiful dog's owner was from St. Louis and could not care for his two dogs any longer due to an illness. The health care worker helped and took the dogs to her daughter in Bollinger County and then received the call to help find them a home. This male is now neutered, Heartworm negative, and shots up to date. He is age 2-3, good with kids and other dogs. Call Marilyn at 573-722-3035 to adopt. We think he is an Australian Shepherd mix. His adoption fee is $200.
« BCSP Report – Week 42 » BCSP Report – Week 44