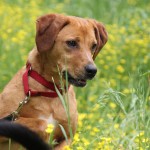 Their mother was a brindle bobbed tail Mountain Cur type: an energetic dog with hunting drive.  When born each pup barely let their mother lick their faces and wound up bodies clean of the sacks that protected them in her womb.

They ran to her dinner table with a determination I had never seen in new born pups before.  So I called the litter the GO GO litter.  Each pup would be named with GO in the name.  I called him Mango.

His intense red color made him stand out from the crowd.  His bright and very wide open eyes always displayed excitement that fit his very energetic character.

I knew he and his litter would be difficult to adopt as pets or as hunting dog pets.  I felt that most of them would be best placed in hunting dog homes.  However, few hunting homes want a neutered dog, thinking cutting a male takes the hunt out of the hound.

His litter developed Parvo at age 6 weeks and all survived.  When he was 8-weeks of age I listed the litter and he was the first to be adopted.

The St. Louis family was so excited.  He was not their first dog and as hard as I tried to make it clear he would be a hand full, they could not resist him.  They agreed to take him to obedience classes as soon as they could.

About three months later I received a call.  HE had been abandoned at the Humane Society of Missouri by the husband.  I would learn that his microchip had been the saving grace to warn me of his plight to a needle.

I contacted his owners to find that the wife was furious with the husband.  They were even talking divorce.  It was not just because of Mango. There were other problems including loosing a job, not searching for a replacement job and a wild dog in the mixdid not help.

The wife went to the shelter to retriever Mango.

Then a couple weeks later a car drove in the yard.  It was the husband and Mango.  Mango’s tongue was sticking out, eyes buggy, nearly shooting out of his head.  He looked like a crazy dog.

The husband was soaked from Mango’s saliva.  I totally understood why he was not working in their home.  Mango was so high energy and not receiving enough exercise did not help.

He was an out of control wild-maniac-of-a-dog!

The husband handed over Mango’s paper work and drove out of the yard saying only a few words the whole exchange.

I had thanked him for returning the wild dog who I would rename TANGO because this guy would not stop dancing and singing the hunting dog song.

We would have him locked in a pen: 12 x 12 building with a 20 x 30 pen until earlier this month when he squeezed through his door.  Tango ran away.

He was gone like the speed of light.  Would Tango return after being locked up for 2 ½ years?  Would he return home for supper?

He did and when he showed his buggy face he was somewhat relaxed.  He came when I called his name and sat to be petted.  He was happy and it was as if he thought I had let him loose on purpose.  He was not afraid of being captured and put up.  So I would let him out again and he returned.  However, he never barked on the run so I was unsure if he was on our property or not and I had to consider that he may have to remain locked.  So when let out again I watched him and he remained close to me in the yard or ran in the open field near the house: always coming when I called his name.

I called Tony, the hunter/dog trainer from Farmington who over a year earlier had come to look at him and his mother Betsy Ross.  I told him of the behavior of Tango and his commitment.  “Tony would you please take Tango and give him a home?” I asked.

So on Sunday Tony and his wife came to our home and took the lead that held Tango secure.  He loaded this handsome, wild eye’d dog into his aluminum multi dog crate, shook my hand and drove him to a fantasy land for a hunting dog.

Tango can dance and sing to his heart’s desire in the woods where he belongs with a family that appreciates a hunter like him.

Tango has been neutered since age 5 months and it has never taken the hunt or energy out of this hound dog.

… We will accept the mangy dog that is almost naked, running the area of Highway 34 near DD, often seen walking along the highway.  Please someone take this dog to the vet but call first.  This dog is greatly suffering from the cold as well as from it’s skin condition.  This could be contagious mange and a crate is in order for transport to the vet.  Does someone own this dog and is allowing it to suffer?  If so please euthanize that dog or treat it and keep it warm with a heat lamp.  We have dog clothes that may fit this dog as well.

… Eugene: 8-10 year old Australian Shepherd: a man from Troy Ohio, 12 miles from Dayton who is disabled himself, has adopted Eugene.  Area pilot will fly him to Dayton.

… Tango: subject of this week’s story, went to a Farmington hunting dog owner and trainer.

… Euthanized: Sharpai and Lab mix type female known as April Hills.  She was suffering from contagious mange, which we had gotten under control, but she also had very low thyroid which was becoming regulated.  However, her skin kept erupting with blisters and caused this gal such discomfort and pain that after 7 weeks of special care, and special food she was put down.  She cried from the anguish and discomfort of her skin condition and I frankly could not take it any longer either.

We had 44 dogs on our property Monday. 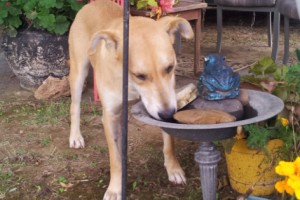 This female looks like a Husky mix. She was found in the Patton/Marquand MO area as a stray. She decided she liked the beautiful porch area of an area home and has decided to camp out. IF she is your dog please call Marilyn at 573-722-3035. She is young and will be up for adoption if not claimed.
« BCSP Report – Week 43 » Happy Tails: Wade and Brian