Thursday night I received a call asking to meet to take a Boston Terrier hit by a vehicle. The distressed caller said, “It was raining. The little dog came out of no-where.”

I have problems driving at night and that evening we had stormy weather, rain from a mist to a down pour all day. It was late, I was tired, it was still stormy. I had to say I was sorry. “I just can’t drive in these conditions at night,” I said. “Can you bring the little dog in to the vet in the morning?”

The caller lived an hour from us. Sections of the road winding like a roller coaster and me with vision issues in the dark: a recipe for an accident. An injured dog and we don’t need any humans in peril too [I thought].

The caller said it was an older dog. They had tried to find his owner to no avail. 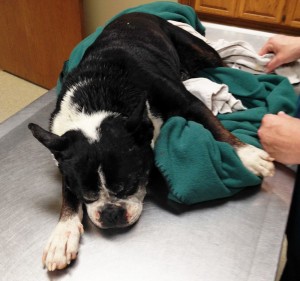 The caller worked in the morning. It would be a lot for her to take the little dog to the vet because she needed to get back to work in Patton by 8:00. So I pondered about who I might call to help with transport early in the morning.

“Keep the little guy warm so he does not go in shock while I call the vet and think if there is anyone who can help with him in the morning,” I said.

Dr. Jones told me we needed a bleached white blanket or towel to wrap around the gash on the Boston’s back. The white towel would help keep the injury clean for sutures in the morning. It may help any bleeding too.

I relayed Dr. Jones instructions. Then I called Sheri (Fred and Makayla) McGruder from the Patton area. “Could you help transport an injured older Boston Terrier in the morning on your way to work?

Even though Sheri had Friday off they immediately agreed and set a plan. They called the Good Samaritan caring for the old dog then met her in the morning.

I am certain the well-being of the little dog consumed the McGruder family, the family caring for the little dog, Dr. Jones and I know he was heavy on my heart too. What would the morning bring?

The dog was not responding to his caretakers on Thursday night and no improvement in the morning. After talking to Dr. Jones I learned he was at least age 10, probably older. He had feeling in both hind feet so even though he was not moving, she believed he had not broken his back. Radiographs were needed. I had the burden to determine to save him or euthanize someone’s pet.

Thursday night I put up an ER plea on FB trying to find his owner. Several Boston owners messaged each

other and none knew whose dog he was. By morning a relative of the owners had reason to believe that the little dog was that of her family members. She was right.

In the mean time I had made the decision to save the little dog, even though he was old and had vision issues. If he had not been a Boston Terrier I am not so sure I would have said “save him”, but all who had met the dog said what a sweet boy he was. All were fighting for him. The folks who own Boston Terriers adore them. If I had euthanized a pet which I felt had a low chance for quality of life, would the owners have forgiven me or understood it was best for the elderly dog? Would they agree how hard it would be for the almost blind dog to recover or have quality of life with a broken pelvic and a broken spirit?

I am so thankful the owners walked in before he went into surgery. They made the decision to end the pain and suffering. They sent him to heaven.

Friday afternoon between rain showers, I went to a farm in Jackson to pick up a very mangy purebred male German Shepherd dog (GSD). The male was about age 6. Pictures showed a very serious case of mange and a low body weight. The property owner thinks the stray GSD got that way after killing a fox.

I called a family who had donated $200 towards the treatment and care of the dog to meet me at the rural property. We tried for about an hour and finally had to herd the dog to the horse barn, and then encourage him to walk into a stall.

I had the Silver family and the property owner named Bob lock me in the coral with stacks of lumber, with a large GSD that we knew had a history of biting…

Not the smartest thing I’ve done, but we had to corner him to get a leash on.He seemed more interested in fleeing rather than attacking, but a fearful dog is very dangerous. Eventually I got one of the collars over his neck without getting bit.

We quickly learned he would not tolerate a leash. He tried to kill it, grabbing and trying to chew it in half. I in turn had to fight him by pulling on the leash to get it out of his mouth. That did not go over well. He grabbed my leg… 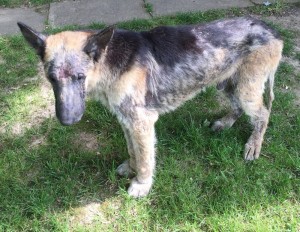 Nowhere to go and there I was, in a corner with him and junk all over the ground for me to trip on. Lucky for me he had not taken a mouth full, only took a small bite and the mouth slipped over my leg thanks to my baggy thick sweat pants.

We regrouped and I eventually was able to get him to temporarily submit. Then I slipped on a muzzle that was a little too large so he could still bite me it he wanted, just not a mouthful. He tried, twice, may be even three times.. . It was like a rodeo, him lunging at my left arm, me pulling him to lose his balance.

My heart pounding: what the heck was I thinking putting myself in a dangerous situation like that for a dog who could make me into a tenderized steak?

When he settled down I gingerly slipped on a second collar with leash attached. The folks who had been holding the door swung it open and Mr. Silvers and I on opposite sides of the fighting dog who was still trying to bite us guided him to a large crate where he was then covered with a blanket and pushed in the crate.

If this dog had not been so sick, I would not have been in such a hurry to move him. He was a rack of bones and his mange was about an 8 with a score of 10 being naked. Scab material about ¼” thick on his face. He was suffering.

In my opinion once we discovered how truly dangerous his temperament was he should have been shot. Without the muzzle, I could not have put the vets in the danger I did either, to euthanize him. No proof of rabies. IF not so weak it would have been especially dangerous, and I would have declined his capture that day. 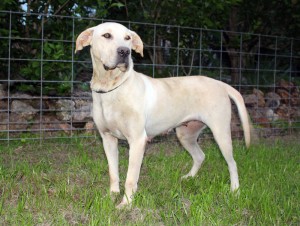 We think this 75 pound female is a Lab Bully breed mix. She has a lot of black spots on her tongue. It appears a collar that probably was attached to a chain has been removed before possibly dumped near our yard. If you know whose dog this wild child is call Marilyn at 573-722-3035.

… 9 yr 4 month old male Yorkie Schnauzer: elderly grandparents had granddaughter leave her dog behind. They felt they could not care for him.

… Magic Mike was adopted to an athletic Illinois family: He is in the Navy reserves.

… Vicious GSD with mange was euthanized.

Calls requesting assistance for dogs we did not admit ():

… FOUND on Co Rd 710 near Zalma: yellow Lab chow and something else mix female, short coat, weighs about 80 plus pounds.

…LOST cat. White with patches of tan tiger. Owner Kim Leslee, Laflin/Leopold area, off of Hwy 34 on U.