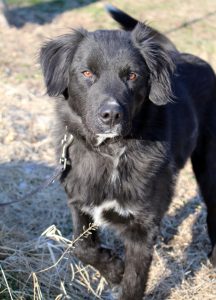 Pet of the Week: this male dog appears to be a Golden Retriever mix. He could be a Flat Coated Retriever or mix of. He is about 18 months old. This dog along with another male was abandoned by a renter who had evaded paying rent and left in the dead-of-night. After contacting the Sheriff’s office the property owner was able to get the owner of one of the dogs to come pick him up. The girlfriend’s dog, this dog, was left behind to fend on his own. This gentle, young male has a crooked front leg from some type of old injury. He is being neutered this week and up for adoption. Call Marilyn at 573-722-3035 to adopt. He has a great temperament for kids.

This article is written to clarify the law regarding the return of dogs found as strays and our policy for their vetting according to that law. Information about our history and the struggle to inform the public about the need to collar with a tag or to microchip pets so they can easily be returned is an ongoing challenge. When you read between-the-lines, you should see that we have the pet’s owners and the welfare of the dogs already in our care as top priority in our “rescue” work.

We started in rescue paying vet bills out of our personal pocket. Eventually we got a license, then our 501 C-3 status. A $300 donation given by a citizen through the courts for a payment for some type of illegal activity deemed punishable by a fine, was the first outside money we received to help pay for intakes.

I worked hard and smart to build up a fund where the intake dogs were adopted and their adoption fee paid for their vetting. I even dared to ask for a few extra dollars, $5 here, $10 there, etc for more adoptable dogs to help put a cushion to care for dogs and cats requiring extra vet care.

From the beginning, any stray pet we took in and found the owner was returned when the owner paid any outstanding vet bill resulting from care for that pet’s basic needs. The basic needs included a 5 to 9-way shot to protect against Parvo, distemper, flu and other illnesses, some being highly contagious. The pets also had an exam to assure they were healthy and safe to bring to our home. They also received a rabies shot, which is necessary by law to keep humans safe as well as the stray.

If they had skin issues, we had to know if they had a contagious type. Then we would start treatment when they arrived for the welfare of the incoming animal and safety of us if contagious and our pets already in our care.

If they were covered in fleas, we applied a topical treatment to keep the fleas from passing to our other pets or in our home (if they had to be kept inside or were severely infested).

If they were starving, as many are, they get a premium food which we have to purchase for over $50 per bag: Purina ProPlan Sport. This food causes the least amount of danger for Pancreitis with the fastest relief of severe malnutrition we have used to date.

The intakes are dewormed. Many also get a fecal, especially if pups, so we know if they have Coccidia and/or worms. Sometimes we need to know the severity of the worms to determine how we de-worm them safely.

Today, we give all intake single pups or one to two pups from a litter a Parvo test so we know how to manage them before they ever touch the ground here or at the home of a foster. This is especially important to the animals already in our care or that of a foster.

When we don’t have the room to take a stray, they end up boarded from one to several days until a spot opens or a foster is found. If the intake stray is very sick, we may have to board with daily vet care to save its life.

We and our vets don’t perform extra vetting. IF I choose to add extra vetting such as a Heartworm test for a severely injured dog, we pay that portion of the bill unless it was necessary to do the test due to other treatment needs or to determine if we euthanize a very ill or injured dog that Heartworm could complicate its survival.

January 5th this year a puppy was found north of Marble Hill. I posted the pup along with another pup we found four days earlier several miles apart.  They were the same age and size, leading us to wonder if they were from the same litter.

I posted these new pups on Facebook (FB) and one of the pups was ID’d with photos to prove whose FB page he had been posted when adopted. That pup was a stage 3 of 9 body score, thin, but not severely starved. The pups were given shots and because I had no room here for them, Dr. Retz’s family took them home and fostered them.

We would learn the owner took down the pup’s FB photos, and he never called the sheriff’s office, the vet’s office, or us to report the missing pup. We were told the pup was a half mile from home, then a mile from home and someone who knows the area told us the owner lived several miles from where found.

After being visited by a deputy, the owner said he wanted his pup back but could not and would not pay the $40 we had invested in the pup for a Parvo test, his exam and puppy shot. The Sheriff’s office made us return this pup to the owner without getting paid.

Unfortunately we don’t have a lot of return to owner dogs or cats during the year, but when we do we fully expect the owners to pay for all vetting.  In the future, I will be taking any pet owner to court to get the vetting fees due to us for taking care of a dog or cat that does not have any ID such as a microchip or collar with an ID tag.

Check out the Missouri Law: Missouri Revised Statute, Chapter 578, section 578.016.1, rule line 2, revised August 28, 2016. The area shelters and pounds and other rescues have the right by law to be paid for “reasonable costs for the care and maintenance” of the subject stray animals we accept in the Bollinger County Stray Project.  This also applies to any impounded pets that we may help through the Sheriff’s department or the Humane Society of Missouri to hold.

The Statute also says a lien for the costs against such animal can be placed until the reasonable costs have been paid and the rescue — shelter — pound may put the animal up for adoption or humanely kill any animal if such costs are not paid within ten days after demand.

The owner of the pup clearly owes us the $40 for his vet care. We would learn he had the pup since December 17 and never had the pup to a vet and had not purchased any vaccines for the baby to protect it from Parvo. He had the pup for 18 to 20 days with no shots and the pup was age 10 weeks or so when we accepted that stray.

Get your pets chipped or get a tag for their collar. Take good photos of your pets NOW. Contact us the very day they disappear and send us photos to post on FB. We don’t want your pets. We want to get the pets that are loved back to their owners and we can’t do that quickly if you don’t do your part too.

If the dog is injured and you can’t afford to pay for the necessary vetting, expect to sign the dog or cat over to us so it can be humanely cared for. As the owner, you have the right to have the pet euthanized and you pay for that procedure. You will also be expected to pay for the care it has already received to examine and stabilize the pet.

… Yellow Lab mix: Wappapello area, lived on a chain, starved almost to death, age 2, relinquished to us by the owner’s sister who ordered her to sign over the neglected dog.

Adoptions, return to owner or placed in other rescues (26):

… Lefty: last of litter of seven salvage yard blk/red pups was adopted by a Kansas Pharmacy student. They drove straight through on Monday to get the Rat Terrier Beagle Lab mix.

… Litter of three pups from MH: transfer to Wrightway in Illinois.

… FOUND 1/18/17:three mostly white pups: may be dumped south just outside of Zalma

… LOST 12/12/16, Hwy 51 located 9 miles south of Marble Hill and 7 miles north of Advance: Miniature Schnauzer male, long coat, could be matted now, belongs to Cathy Prost. Salt and pepper color : this dog may have been stolen and taken to Poplar Bluff area.