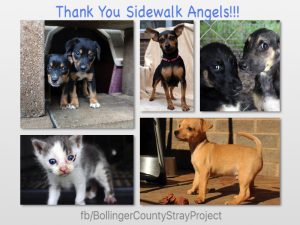 Singer-songwriter Rob Thomas and his wife Marisol, founders of the Sidewalk Angels Foundation, along with the Borgata Hotel Casino & Spa in Atlantic City, NJ held three concerts in January 2016 to raise funds to provide assistance to animal rescue and advocacy organizations.  Thank you to the “Human Angels” that support Sidewalk Angels in their fundraising efforts.

The Bollinger County Stray Project  is a small animal rescue in Southeast Missouri, located at the foothills of the Ozarks. We live in an artist’s paradise, where the heavily wooded area is so beautiful. The splendor, however, can be deceiving. It is a rugged place for many citizens and their pets.

It is hard to find good paying jobs in our area.  Our county consists of mostly tiny villages with our county seats population was just 1,528 in 2013. The headquarters for the BCSP is located near the village of Zalma, MO, population 102.

Most homes in our area have two to five dogs. In many homes dogs and cats are not spayed.  Many family pets were former strays. The reasons are multiple and mainly have to do with “My parents never spayed their pets”, or “We just don’t have the extra money [to spay].”

Before the creation of the Bollinger County Stray Project and then the grant funds from Sidewalk Angels Foundation (SWAF), it was a bleak place for a lot of unwanted pets.

We are blessed, because of SWAF, to help with spay costs of low income or struggling households with multiple pets to halt the birth of unwanted baby puppies and kittens. By doing so, the numbers of dumped baby and adult pets have been reduced, halting the suffering that most dumped babies had previously endured.

With the help of SWAF we are working on prevention through education and we are putting the fire OUT slowly, but surely!

SWAF helped with the spay costs of 190 cats, some being feral cats as a catch and release.

A total of 242 pets were assisted in 2015 thanks to the donors of SWAF, the board of their amazing organization, and by the assistance of our three main partner veterinary offices.

The grant assisted with an additional $10 for rabies shots for almost all the grant approved pets.
Before SWAF assistance, we saw so many more cases per week of suffering pets and more severe cases, but word has spread about the available grant money.  It took us two years to use the first $20,000 donation awarded us in 2013. Last year was our second grand donation and we used it within a year! We have people asking for help now, waiting to start getting pets spayed thanks to Sidewalk Angels’ generous gift!

When neighbors, family, and friends talk about your grant assistance, they educate along with all of us, the many benefits of a spayed pet, and there is a good deal of pride owning such a pet.  Owning a spayed pet shows a love for life, that the owners are responsible and logical, and that they care about the well-being of their pets and their community.

Pictured below are several touching cases of stray pets dumped in Bollinger County within the last 45 days, as unwanted babies or females abandoned because they were pregnant.

Three Pit mix puppies were dumped along a highway in Bollinger County. Two were slaughtered on the highway. This boney and terrified puppy was saved by a Good Samaritan. He now lives in Omaha, Nebraska.  Photo 8/21/16.

There were eight feral pups at just 5-weeks old. We could only live trap seven before the mother moved the last pup. These are just two of them.  Photo 8/4/16.

We did not know it at the time she was found, but this severely starved Lab mix was very pregnant. She vomited for several days when feed, unable to keep food down because her stomach and guts were so damaged from Whip and Hookworms.  Photo 8/22/16

For over a week she was fed 4 to 5 meals a day of canned food until she could tolerate a mix with high protein dry food.  Then her belly blew up and her breasts started to swell.  Photo 8/22/16

Three baby pups born in late August, from a stray Lab mix mother three weeks after we admitted her. Photo 9/1/16.

Two severely neglected and starved puppies, found dumped at a county horse riding park western Bollinger County. They are the first case of long term neglect puppies we have had with discolored teeth, showing the rings of neglect from poor nutrition and heavy intestinal worm infestation.

They lacked muscle mass on their faces, fur easily pulled out and the one's belly (pup to the right) sticks out low from the liver pushing down from the toxins from the parasites. They were so covered in seed ticks it was as if their body was covered in pimples.  Photo 9/3/16.

Their bony frames had large patches of fur missing showing a long term battle with the fungus. Photo 9/7/16.

This 8 pound female was owned by a heroin addict and was bred by a neighbor's chihuahua. She had four unwanted puppies including the red sable pictured with her. We have received calls from several states to adopt them. They are the lucky ones. A relative took the mother, named Lily Tune. Due to their great care the pups did not suffer.  Photo 9/16/16.

We are finding great homes for the puppies. Mom will be spayed. This is one of the lucky dog stories, where the pups and mom did not have to struggle to survive those early days after birth.  Pups listed on Petfinder. Photo 9/16/16.

You can follow us on our Facebook page to keep up with the stories of the pets in our care and see how your donations to SWAF help us help others.

Thank you and God Bless you all,

The Board of the Bollinger County Stray Project