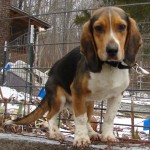 This Beagle male has been a stray for almost two weeks. HE was incorrectly listed as a possible Dachshund and Basset mix in last week’s paper. We think he is a purebred Beagle. He was found near Marquand on Co Rd 858 near Liberty Church. Call 573-722-3035 to claim or adopt. He is about 8-10 weeks of age.

We also have several new strays pictured that we need cross posted in an attempt to find their owners. Two of those dogs are elderly, in critical condition when received. The cold, starvation, and dehydration is a killer combination.

Nanook is boarded with the Marble Hill vet until we find his owner, a foster or adopter.  The dog we call Wally Pa Pella is with us.  He was found by a Wappapello couple who are gone up to 3-weeks at a time driving a semi over-the-road. Even though the Holguin’s would learn this red stray had been in their neighborhood for nearly a month, they had never seen him until Friday.

I am not sure if they found him laying on the road side or in their yard. What I know is that the urgency on the phone, the emotion in the Sandy’s voice was convincing that this stray was in desperate need.

They had contacted all their neighbors and learned from a pastor that this dog was seen pacing their road back and forth for 3-4 weeks, apparently no one taking the initiative to feed him or offer water.  St. Francis, the saint of animals, must have been watching over this stray, since no one else apparently was…

He is a long coated, intact male who resembles an Alaskan Malamute and Husky mix.  His face is lighter in color, either a sign of his age or maybe due to the color and markings of his potential breeding. This guy could even be an Akita mix. However, his center toes are extra long, something I noticed in the photos of the Husky and Malamute dogs.

He has a blocky head more like that of a well-bred Malamute. We know he would be a mix because his color is not part of the Malamute standard. I have seen his red hue in Husky breeds. He has strong upright ears like the Nordic breeds.

It is important to “guess” the breed type as accurate as possible in order to find the owner of a stray. Also adopter look for a specific type of dog.

Last week I posted a possible Bassett and Dachshund mix.  When I picked up the dog I knew he was a Beagle, probably a purebred.  He is Pet of the Week.

Wally was delivered to us just after noon, when the vets were closed for the weekend.  He was so weak that when taken out of the truck he started to urinate then fell into the puddle.  After a few minutes he started to urinate again, while lying, and he being so dehydrated, turned his head trying to lap the brownish gold urine as if it were fresh water from a running creek.

Then he laid flat to rest, looking like a body from a concentration camp.  I looked at his teeth.  There was plenty dark tarter, a tell-tail-sign of a dog age 8 or older.

Sandy stated she had given him three bowls of water when he was found.  She did not know she could have killed him by doing so. Dehydrated mammals can drown by over hydrating to quickly. When given too much food they can also become sick with a number of symptoms possible including liquid diarrhea, stomach cramps, and more. The pain in their belly can be so intense that they stop eating or drinking. Such dogs need several small meals and many drinks of rationed water rather than a lot at one time.

I thanked the Holguin family for their concern and lifted Wally into our truck to crate him until I could prepare a place to keep him.

Usually the vets care for a dog as week as Wally. Knowing he would have bladder issues and was too weak to walk into or get out of our heated dog houses, I asked my husband if he would divorce me if I brought this sick dog in the house. He needed a bath, he needed heat and he needed 24 hour care.

Michael knew that our sacrifice was the difference in saving Wally’s life and he said, “Do what you need to do.”

We are seeing improvements in his strength every 12 hours, though small improvements, he is now interested in watching us and does not lie flat 24 hours a day. He struggles to get up instead of expecting me to carry or lift him to eliminate outside.

I am not sure if the public knows how much my husband sacrifices, puts up with, for the strays. I get the thanks but the thanks belong’s to many: the families who save the strays, those who foster, the board officers, and the vets for making room for the emergencies. The vets give us discounts and often do personal foster for us as well as adopt some of the most difficult dogs who are older or some of the more seriously injured dogs and cats.

Today is Monday February 10. We have a vet appointment at 4:15 to get the verdict on Wally’s health and age. When I told my husband that we might euthanize him today if he is real old and has Heartworm he protested, saying that he wanted us to try to do everything to build him back up and see what he could be. “Do everything to find him a home,” he protested.

Was this old man dumped or was he lost chasing the scent of a female in season? He is very intelligent, good natured and trusting.  He likes a crate, is comfortable in a house, likes to ride in a truck. He was someone’s buddy.

Hopefully that someone will come forward to get him back and show the same commitment of my husband.

… Boston Terrier or mix of male, age estimate 2, about 30 pounds and stocky.

… Expecting to accept a young Pom Yorkie mix male on Monday who is a barker.

… Second Great Dane/Great Pyrenees mix pups, female, went to an O’fallon family, son of a Bollinger County family who adopted from us in the past. Children overwhelmed with joy and so was the puppy after the first 12 hours of adjustment!  See her on FB.

… We are fostering three dogs from the Patton area whose disabled owner’s home burnt down. Owner: please call me at 573-722-3035.