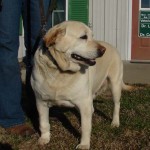 Those who read last week’s article know that we had received a letter from the Missouri Department of Agriculture (MDA) stating that they were not going to renew our license for 2014.

Many of our supporters have made calls, sent emails and I know some have said they were going to write to our Legislators to voice their support for our work and quality of care we give the animals we are able to accept in the Project.

Monday I received a call from former Senator, Bill Foster, Senator Wayne Wallingford’s “right-hand-man”.  Mr. Foster assured me that their office and Shelley Keeney are working hard with the MDA to keep us open.

It seems to be working!  I was told to fill out our annual application for the 2014 license renewal while Senator Wallingford’s office continues to meet with the MDA and probably other senators as necessary.

So at the present time, it is business as usual (thank you Lord and Rescue Friends)!.

Many good things may materialize as a result of our need.   If and as they materialize, I will let you know.

Thank you to everyone who has contacted us about your support for the work our volunteers do.

2013 we had so many high demand pets that were quickly adopted and generous donations that we were able to save more pets with serious injuries unlike in past years.  We treated more dogs with Heartworms too.  We accepted several pets older than age 6 and all of them but two were adopted in 2013.

We still have Kallie and the end of December we had an elderly yellow Lab female that was not claimed.

We accepted several cats and kittens 2013.  One kitten flew to Fargo ND.  Another was transported to the Chicago area.  The others adopted by St. Louis and area families.  A Chicago rescue also took several felines.

We euthanized 11.7% of the intake pets which included two severely injured kittens.  Most euthanized had severe medical issues.  We never turn our back on injured stray animals.  We must consider quality-of-life issues as well as our pocketbook.  We agreed as a board to run this rescue like a business and not go in the red to save one or two dogs when so many more need our help.

It is risky to the general population and too easy to contaminate the homes of fosters with parvo dogs.  A high number of euthanized dogs had parvo.  We now test new arrival youngsters before taking them on the ground.

I am confident that we helped at least 200 other pups find refuge in other rescues, especially our friend group from Illinois.  We can’t accept the bulk of puppies we are asked to assist and the Illinois group specializes in puppy adoptions. They have three vets on staff and also test for Parvo before accepting.

What will 2014 bring?  I feel confident that we will be able to stay open because of our area legislative and your support.  I pray we save as many or more strays and unwanted pets.  I also hope that those of you with pets who need to be altered but can’t afford it on your own will ask us for spay voucher assistance and that others will realize the advantages of a spayed female pet and get it done.

Thank you to all who have supported our work and helped the strays who needed you the most.

… Elderly yellow female Lab, estimated age 10, was not claimed.  A gem of a dog we still hope the owner comes forward for her. Originally we were told she was a young yellow Lab who was found next to the Castor River near Grassy, but her front teeth are wore down to the jaw, Heartworm negative, sweet as they come.

Adoptions, return to owner or placed in other rescues (34):

… Sister to above pup, white with hazel eyes and spots: went to Fredericktown family.

… Sister to above pups: went to Valley Park MO occupational therapist as a therapy dog.

… Boston Brew Inns: brother to above pup, went to an Exercise specialist at Barnes Jewish Hospital in St. Louis.

… Rosie Higgins, Schnauzer and Cairn Terrier type mix, with us since May: went to 4th grade teacher in St. Louis who adores this wild child!

… Butch Cassidy is the Sundance Kid: German Shepherd or Husky mix, age 2, white, with us over 18 months, adopted by his foster family-Karen and Randy Sanders.

… Patrick Jane: 6 mo male Border Collie mix from Puxico area, adopted by a Van Buran family who own a campground.

… FOUND: hit possibly by numerous vehicles, passed by many more, yellow male, about 25 pounds.  Finally a former adopter of a Project dog, Maggie D., stopped and picked the little guy up and brought him to Dr. Colleen in MH.  He was so cold that shock had set in and after an x-ray, found to have a broken back.  He was humanely euthanized.  *THANK YOU MAGGIE for your good heart.

*Note: when you find a wounded dog or accidentally hit a dog, please don’t abandon it.  IF you are too afraid to help the dog call us and we will ask the Sheriff’s office or a dog savvy volunteer to pick it up.  If nothing else a deputy can shoot it to end its misery, be it too aggressive to be brought to the vet.

… Asked to assist 3-5 large dogs from an elderly veteran from Poplar Bluff whose home was uninhabitable due to cold and moved to a veteran home.  This is a priority situation and we will assist if no one else does.

…  Asked to take a 4 yr yellow Lab fe, 2 yr chocolate Lab male, 3-4 yr pointer male.  All are altered, unsure about Heartworm prevention.  We will if we do not end up with the above dogs.

We are down from 72 to 43 dogs and pups on the Neville’s property. We are skating on ice in the yard and having to carry water again.  It helps a great deal to have fewer dogs.