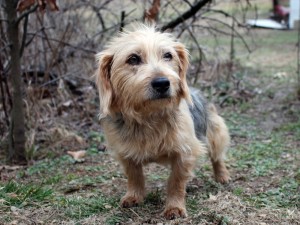 When I took this photo of New Yorkie 2/20/16 I could see that his eyes were dull, but I did not know why. His spirit was not full of life like it was when he first came to us in December. He was showing many of the signs of a dog with heart disease: heavy heart beat, easily tired, generally lethargic, uncomfortable when he laid to rest. At the end, while on heart medication, he started to cough and he lost his hearty appetite.

The reward for the arrest of the person or persons who dumped at least two 12-week old puppies has been increased from $100 to $210. The subject pups are the two we were notified and accepted in the Project about two weeks ago. The pups are a deep red female found at the bridge in Glenn Allen on County Rd 804 off of ZZ and a black and tan male from the Leopold area off of Co Rd 416.

In photos they looked like Mini Australian Shepherds. However, Saturday the red female came to our home. After her weight gain, seeing her conformation, her intense red color, ear placement, thick tail, and more, I think it is possible these pups are mixed with Chow.

A year or two ago I took two Chow mix male pups that a man in Glenn Allen had dumped. A neighbor recognized the pups when posted on Facebook (FB).

So, I ask you who owns a female which had Chow mix pups in the Glenn Allen or Marble Hill area that may have dumped these pups? The mother dog may not look Chow as it is possible the Chow mix would be the father.

The female pup has no black on her tongue so it is most likely a parent could be a mix with Chow. I must make it clear, we think another possibility is a mix with Australian Shepherd, but I find the deep red color very unusual for an Aussie mix.

We had another odd dumping last week. I received two calls about yellow spotted dogs that look like Labs, but both have bobtails. The male which was found 2/29/16 between County Road 370 and Highway 72 in the Millersville area was fat and the female found 3/2/16off of highway 91 on County Road 426 was thin. Both are young. Sounds like they could be siblings, but what’s the odds?

A year or two ago I was told that a dog I had posted from the Sedgewickville area belonged to an Advance family. The owner of the dog suspected a neighbor who is a contractor known to be building a home in northern Bollinger County. The “dispute” about the dog being stolen and dumped was not my business, but I think the contractor is “still alive”, apparently handled somewhat civilly (I hope).

Folks, if you have problems with a neighbor’s dog or dogs, please do talk to them to find a remedy rather than taking drastic measures into your own hands.

On another note, last week was hectic and sad. A little Yorkie Beagle mix dog we accepted in December of 2015 was found to have a bullet lodged near the tip of his heart. It was lodged in the membrane surrounding and protecting his heart.

The bullet was causing heart failure, possibly even lead poising in the little dog we had first named Callie (the name of the family who saved him). I later changed his name to New Yorkie or as I called him “Yorkie”.

This little guy looked just like a Yorkie, weighing in at 19 pounds when he first came to us, not boney, but a little ruff feeling around the ribs. I remember too finding a scab around the rib area that I thought was from a tick bite. Now I suspect it was from the 22 looking bullet that would cause him to become lethargic and suffer from heart failure.

All the time here I was shocked no one was calling to adopt him. Never have I had a Yorkie or mix of more than a couple weeks to a month because they are in such hot demand, but there were no calls for New Yorkie.

I suspected the lack of calls being that we believe he is part Beagle. We generally have a heck of a time adopting out Beagle and hound dogs or mixes of.

At Christmas Santa came here to bring a Marble Hill family a pooch for their young son. The dog Santa picked became deathly ill shortly after the holiday. That was the first time we had something like that happen after an adoption and I had suggested Yorkie to that family at Christmas and again after I heard of the other dog’s illness.

Later I had an adoption for a little dog that we called Collins. The first name I had for the Yorkie mix was Callie, The names were so similar so I changed the Yorkie’s name to New Yorkie. I was rationalizing that my disintegrating memory bank could keep them straight better that way…

Well, in my excitement with the call for Collins, I had in mind the Yorkie (formally known as Callie), still thinking Callie/Yorkie was Collins… OH dear…Unfortunately I had volunteer Tammy Beck transport the wrong dog to Sikeston to meet a Memphis family adopting Collins…

Oh My! Tammy said the look on their faces was total shock. You see, Collins was a white with black patch Dachshund Rat Terrier type mix, not all like the golden and black long coated Yorkie mix I discussed with the family on the tele!

Fate: twice this little guy was kept from leaving my arms. I am so thankful for that. I believe things happen in life for a reason, as was the chain of events for Yorkie.

We had $511 invested in tests for him including chest radiographs after he started to cough 2/26/16. There it was. The answer to his speedy deterioration.

Surgery would cost $3,000 to $4.000 and he would have a short life due to heart failure if he survived the surgery… No way would we spend that kind of money on one, money to help so many others. I learn from every dog we care for. Yorkie gave love and taught me a great deal, even if it was heartbreaking.

Adoptions, return to owner or placed in other rescues(6):

… Ember: Brindle female mix with pointed upright ears, saved from a burning house, adopted by the firefighter who saved her.

… Martin: Border collie mix who tried to commit suicide on Hwy N was neutered. Radiographs show he has a defective hind left leg, probably injured during or soon after birth or as a very young pup. He uses the leg, but gets stiff soon after running. The leg is shorter and ball/.socket area is damaged. He is not a candidate for surgery: has Erlichia.

…Three black Pit mix youngsters dumped at the home of a disabled senior couple using home nursing care: helping search for a rescue to take them this week.