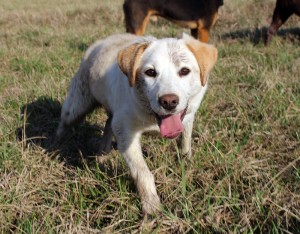 This yellow Lab female has been with us over three weeks and will be spayed and up for adoption this week. She is very high energy and requires a family that is dog savvy and knows basic obedience or she will drive you crazy. She is more interested in being loved than chasing a ball. Great with other dogs and strangers. Needy gal needs another dog to occupy her and an active family or person who can wear her out. Call Marilyn at 573-722-3035. Adoption fee will be $300.

A surprise development regarding the three missing Catahoula dogs that evidence suggested were stolen or let loose on Easter Sunday. The dogs were found a day after the Banner Press article appeared in last week’s paper.

I will report any updates as permitted or fitting that will not affect the sheriff department’s investigation.

This past week we accepted a 12 pound male Dachshund Rat Terrier type dog from the Essex area after receiving a call from Helping Hand’s Veterinary Clinic. A Stoddard County resident asked for help for the dog which she had cared for about two weeks, saying she found him that morning severely injured.

She had been calling the dog Yoda.

She thought Yoda had been attacked by a dog. However, injuries indicate he had been hit by a vehicle.

Yoda had road rash. Road rash is when the bruising in the impact area is visible. A dog attack looks much different where open wounds are involved.

Yoda had no dog spit on his body. There is a distinguishing smell on a dog that has been attacked by another dog. Also there was no dried sticky saliva on his body: a sign of a dog altercation.

Yoda’s radiographs show at least one broken rib, at least four serious breaks of the Pelvic area and a BB stuck in a rib. There were no teeth marks, no puncture wounds in the area of the broken bones. The breaks are pretty typical of what I have seen from impact injuries such as being hit by or run over by a vehicle.

He had no head wounds other than a cut on the lip, but his groin area wounds are unlike any had seen before. He was ripped open but no marks to match a bite were visible on his back side.

I must mention that it is common when a dog is injured and screams that other dogs in the area may attack the screamer, even if the injured dog is “their friend”.

That is one of the hardest of behaviors for me to accept or understand about dogs. This behavior also explains why a chained dog who loves a family’s child will maul that child when it is wrapped in the dog’s chain. The child may scream and thrash trying to get out of the stronghold of the deadly chain.

I saw Yoda before we spent money into saving him. He was like a zombie however he was not aggressive, even when suffering unbelievable pain. So Amanda gave me a quote for his medical expenses and we had a sponsor agree to pay his bills.

The next day he had surgery to clean up the wounds and suture those that could be. Other’s needed to be left open to drain.

I picked Yoda up at closing time on Friday. Since then he has had some daily improvement, albeit slight. He had lost a great deal of weight in a very short time.

He ate about a tablespoon of food late Friday night but would not drink. Saturday he would not eat or drink so I started to force feed him sticky a/d food and give him Pedialyte with a 12cc syringe, 24cc’s each setting several times a day.

He still would not eat or drink on his own Sunday or Monday morning.

I also gave him mineral oil to help with his early bowels. They need to be soft and to easily empty since this little guy was in so much pain in the back half of his body. He has so little strength to be standing and straining too.

I have given him two B-12 injections and an iron injection too. Yoda has received pain killers and antibiotics daily as well.

A big improvement is that he has been able to stand and actually started to walk on Saturday night. He took three steps on his own.

He urinated in his bedding the first night. I expected that and lined his open top pen with potty pads as well as laid a pad under his white cotton flannel bed sheet. I changed his sheets every two hours that first day and twice his first night.

With open wounds it is important he has sterile, white cotton bedding which can be bleached.

Monday morning I covered the deck with white sheets, made a shaded area for him to lie under two lawn chair. I turned on a small fan to keep him cool because the brick of the house was making the deck pretty warm. At 1:00 when I looked out the window to check on him I saw him trotting on a wobbly track back to his bed after walking about three feet away to tinkle!

“Progress,” I thought. It looks like this guy has more heart to survive and to keep himself clean than he lets on to me.

Now, if I can just get him to eat and drink freely on his own. That would be a real sign he wants to live and he has the fight to do so.

His right rear leg seems to have severe nerve damage. IF that is so, and the leg will not function, the leg may need to be amputated. That would lead to more challenges for us to care for him since the breaks on the pelvic are bad on both sides of his hips. He would likely need to use a cart to move any distance.

Right now I feel like we need a miracle for little Yoda and guardian angels to pull him through this challenge. I also need some sleep…so we are hoping that the laser treatments he will be getting for healing and pain management may be beneficial.

… Litter of 5 Jack Russell and Cocker Spaniel type pups, 3 red, 2 black, all females 7-9 weeks of age. I think they are from two litters.

… Tiger Tabby: Brindle Husky mix female, with us since October of 2014, went to be a therapy dog for a returning military hero who has been deployed to Afghanistan , Iraq, and Cuba.

… Walker Coonhound female, Duck Creek Delilah, was adopted by a Stoddard Co family who lost their pet Walker several weeks ago. This dog has heartworms and we will pay for the vetting for her spay and shots, they pay for her HW treatment.

… Asked to take a very active Lab mix with anxiety issues. Searching for a rescue.

… Taking back a 9-yr old mini Schnauzer whose owner died of cancer.