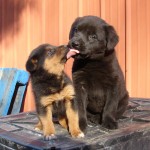 Eight pups were dumped one mile from Highway 51 on Highway E along side of a green abandoned hunting cabin.
These pups look to be from two litters but their teeth are those of 5 to six week old babies. Three clones of the black and tan smaller pup were already dead.
The five small pups look like Fiest’s, squirrel dogs. The others look like Lab or Rottweiler mixes.
One of the larger female pups is black and tan and two other large pups are black. Call 573-722-3035 if you know who had owned or dumped these puppies.

This week I am donating my time as a rescue volunteer in the memory of William (Bill) Wright of Zalma. Bill was my closest neighbor, just up the hill going towards Zalma. He lost his battle with cancer just as the storm hit Zalma on Thursday and hail pounced on his roof. This handsome man had a powerful and delightful singing voice and a smile that will not fade from the memory of his friends.

Saturday night was Bill’s wake, Sunday his funeral. I told Edith, his wife, I would see her either day depending on whether I had any emergencies with the dogs.

I walked in the house to prepare to leave for the wake and checked caller ID for new messages. One had come in from Tammy Beck, another from Mary Ann McCain and her sister Katelynn Wheetley. They were calling about a group of puppies they found beside and under an abandoned cabin on Highway E, about a mile from the junction of Highway 51.

The tone on the phone was of urgency and despair. “We found at least three dead puppies,” 17-year-old Katelynn said. “There are at least 5 more but some are under the house, and we can’t get to them.”

“Could you take the puppies? They are so weak and one may be dying,” she continued.

Katelynn called her father who picked her up with the two weakest puppies. Her sister Mary Ann would ride her horse and pony Katelynn’s by the reins about two miles. I would meet them at Tammy Beck’s house and test the pups for Parvo before taking them to our home.

They were Parvo negative. The two pups in Katelynn’s arms were less than a pound each. They were so dehydrated and boney. She wondered if they could survive.

They were so cute: black and tan with an extra long muzzle. Teeth were as long as a typical 4.5 to 5-week-old. They could be 6-weeks. I was not sure. I had the IV bag, formula, feeding tube and experience. I knew I could save these babies.

When the horses were put up we piled in my truck. It was already getting dark, after 5:00pm. I would need a flashlight and fortunately had one in the Silverado.

When we pulled up to the abandoned cabin I noticed that the driveway did not show any signs of recent tire tracks on the grass. A metal gate closed the drive so the person or two families who dumped the pups had to park “in the open” and walk to the cabin to dispose of the pups.

I wondered if they felt the least amount of compassion for the pups while they made the trek to the old green cabin. Did they plan to starve them to death? Did they think the pups would find their way to Highway E and stop traffic, leading to their rescue?

Did they plan for the babies to die? Think nothing about them or care about their fate? Are they of the mind that they can drive by that spot on the highway and not give a care or thought again about the litter of five and the other litter of three [that they would unload and walk away from]?

What kind of people were they?

As we walked up to the house an old box spring lay in the yard, no cloth, just wire and frame. In between the coils lay tangled the body of a matching tiny baby, an apparent sibling of the two already rescued. On the east side of the cabin laid another littermate, facing to the east, about 6 feet from the cabin. She had crawled as far as she could then dropped from exhaustion and dehydration. She succumbed to the environment and empty belly.

“Next to this puppy’s body is where the weakest pup had laid,” said 17-year-old Katelynn. “I wish I could find out who did this to them.”

Yes… what kind of person is it that can walk away from such young babies…?  Mary Ann and Katelynn pointed out the spot of the third dead puppy. It had died under the house directly under the porch door. It laid spread across a rock with plenty of room to move to a more comfortable location, apparently too weak for another struggle over a minor hurdle. Maybe the rock pushing on his belly took away some of the cramps of hunger. Maybe the cold night and cold rock took him faster by freezing him to death.

Three lab mix pups remained. As I reached into the pockets of which they were hiding the girls stood holding thick blankets to wrap them. No one would get bitten. Unlike the two smaller pups that were already rescued, the three Lab pups were terrified, thinking we were there to hurt them. They had little fight left in them and once wrapped, they submitted.

When I got them home they all received IV fluids, a B-12 shot, iron shot and were dewormed a half-the-regular dose. Then they were fed a small amount of ProPlan Puppy food mash with raw egg yolk.

Every two hours until 2:00am they were fed again and the three weakest received another IV.
Sunday my day was consumed with the litter. I would miss Bill Wright’s funeral too. I gave two more IV’s to the weakest. The rest were already thriving, wagging their tails when they saw me.

By 11:00am I told my husband I was unsure the weakest little girl would survive. I thought she might be shutting down. By 1:00 I was fairly sure she was leaving me. By 8:00 her heavy laden breathing and dull dark eyes were asking me to end her suffering.

IF you know who it was that refused to call me to take their unwanted litter or litters please call 573-722-3035. It is so simple to just call us. We have several resources to take pups as young as these were. There was no excuse for what was done to these little pups: none what-so-ever.

… Louise EEE Anna, Beagle Min Pin mix: in EPIC Program, Cape Girardeau, adopted by her foster famiy. See our FB site to read about her and the EPIC Program. New owners are a Lawyer family with two small children.
… Jolee aka Sandi, Australian Shepherd female, going to fly with volunteer pilot Tim Winters, half way to Oklahoma City. Owner is age 82, grandson lives with her and son will take ownership should his mother become unable to enjoy her pet at home.

Dumping dogs is a form of abuse and against the law. We want to find out who dumped the two litters of pups who are the main subject of today’s story in this report. We either accept or find other rescues to take young puppies in hours to 3 days from the call in most cases. Young puppies are in high demand in the rescue world because most callers prefer puppies, thinking older dogs are harder to adjust to a new home. Actually older dogs are easier to train and you already know their temperament and personality.

Please report animal abuse or neglect. Please help us find out who the dog owners were that dumped these two very different groups of pups at the same location on Highway E, about a mile from the junction of Highway 51, south of Zalma.