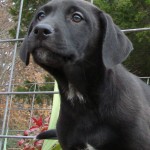 Our Pet of the Week: Oreck – one of seven pups are left that are Corgi or Heeler mixed with Lab.  This litter is so intelligent and well-mannered.  I am unsure who the alphas are as they have such even temperaments.  I have never heard a growl from them.  The adoption fee’s for the black pups is $150 which included their shots, rabies, deworm, and spay or neuter.
The pups are named after vacuum cleaner companies because they eat like a vacuum due to their large litter. Call Marilyn at 573-722-3035 to adopt.  Out of the area adopters receive a $50 refund with proof of alter and they pay for remaining vetting.

The following weekly report is about the history and adoption of Eugene andJR.

The Officers of the Bollinger County Stray Project want to voice our gratitude: a heartythank you to the sponsors who generously donated to the Eugene and JR fund.  Without your donations we can not afford to save dogs like Eugene or to treat a large dog like JR forheartworms.

JR started his Heartworm treatment the week that he left with his new owner.   He may be coming back to our vets for his second treatment due to the discounts given.

JR is doing so well in his new home where he is living with a cat and a senior fromRolla who starts a new job in Iowa in December.   After the reality hit of the hectic schedule she has those first two weeks after graduation, we might have JR back for a whileduring the Thanksgiving holiday, the move, and for his second treatment.

The parents did not get along, grounds for a divorce.  The divorce would causetheir children and their pets to experience many changes in their lives.

Mom took their children, but they both left the dogs behind on a remote farm a few miles outside of Marble Hill.

One of the dogs was a yellow pup. With him was an adult Australian Shepherd, mostly white in color with red on his ears an acouple other patches of the rich color on his body.   The older dog was an alpha, the leader for the pup. Together, every morning these dogs walked to the end of their driveway with thechildren to meet their school bus and returned in the afternoon to usher them home.  One day the family drove out the driveway with theirhousehold possessions packed in vehicles.  They left the faithful yellow puppy and the loyal Australian Shepherdbehind, never returning to pick them up.

A neighbor who owned hunting land across the road had watched the loyal dogs bring the children to meet their school bus.  The neighbor lived in the Jackson /Cape area.  He had heard there were family problems and then he saw them part ways, leaving behind the young yellowpup and the older Aussie.

He had admired the loyalty of the dogs and good-manners they had displayed with the children.  When the family failed to come back and the dogs showedsigns of being hungry the neighbor would become their caretaker.

The neighbor would drive from the Cape area to his hunting property 2-3 times a week, bringing back food and leaving enough toassure they were fed until he could come back.  The dogs would drink their water from a creek near the house.

He did this for three years…

One day another neighbor who knew of the dog’s plight, was in line at an area store. She over-heard the children of thedivorced family telling a friend “they had just gotten a new puppy.”  She wondered if they even thought of the dogs they had left behind. They never mentioned their loyal yellow pup oraging Aussie.

Two years had gone by when I was called about the two dogs.  I said I would not trespass or attempt to catch dogs without help.  It was foolish to go alone.  I did not know if the guardian breeds would accept me.  I did not hear about them again for another year, three years after they had been abandoned.

The hunter and the neighbor lady devised a plan.  They would gather the dogswhen I was coming to Marble Hill.  We met August 30, 2013.

I watched their male caretaker walk up the weed-lined driveway with the neighbor lady: two large breed dogs followingbehind.  The yellow pup now weighed about 80 pounds, tall with eyes and color similar to a seal pup.  He looked like an Anatolian Shepherdand Lab mix. He would be age 3.  The Aussie looked old and with a quick check of his teeth, I figured8-10 years of age.

They loved the man from Cape. He had provided for them, worried about them, and he had now saved them.

When I saw how old the Aussie was I explained that there was a strong likelihood he would have Heartworm.  Temperament would have a lot to do withthe fate of the dogs as well as quality of life.  I may need to put the old dog down.

They loaded very well and we went straight to the vet.  I decided to name the olderdog Eugene and the younger dog JR.  I would name them after the man who did not forget about them, whofaithfully cared for them. Even though Mr. Eugene JR could have forgotten about the dogs, he drove about 45 minutes [one way] two to three times a week.

Eugene, the dog, would be tested stage 2 Heartworm positive.  JR was stage 1positive.  It was a punch to my stomach when given the news.  Howcould I euthanize the older dog after all his caretaker had done for him?  After a discussion with the vets we all agreed Old Eugene’s health was good enough to save him and so both dogs wentinto surgery to be neutered.

The last week of October a student from Rolla called asking to adopt JR.  I sat in mypaisley office chair in deep thought, “What would become of Eugene without JR?”

Eugene was going blind and his vision was very weak.  He had come to depend onJR.  JR depended on Eugene.

I prayed, “Had I made a mistake saving the old dog? Please help me find a home for old Eugene.”

Then later that afternoon the tele rang again.  It was a man from Troy Ohio. He was shopping for a dog for his best friend who had just lost his AustralianShepherd companion of over 15 years.  Jim had done a search on Petfinder for “Australian Shepherd anywhereUSA”.  210 pages had popped up and Eugene was on page 45.  Jim stoppedhis search.  His friend James has a heart condition and this dog named Eugene needed James as much as James neededhim.

The dogs left for their new homes, separated only two days before their leashes were handed to new owners.  Eugene was flown by area pilot TimWinters with Robert Alford riding as dog watcher.  They flew Eugene to a grass strip in Troy Ohio where he met James.

To see a photo and a video of Eugene and JR,  you can visit our YouTube channel or our Facebook page.

… Black female Cocker mix type, from Patton area churchyard, abandoned for weeks, then started to look PG:  fed by several from church.  One member took it upon herself to save this dog while others discussed how to get rid of her.

… Yellow 4-year-old Lab and Husky mix female- Maggie: owner could not keep her home without fenced yard.  She loves to play dress-up with small children.  Maggie was an awesome dog for an autistic child.  Looking for a family with special needs child or adult and a fenced in yard.

… Voltage Watt: yellow mix puppy originally found at a church revival as a puppy, wormy, very hungry.  Several church members were concerned about him, being only 6-8 weeks ofage at the time.