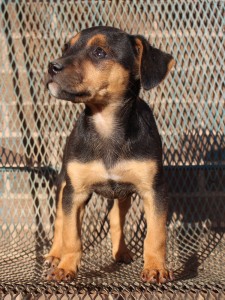 At about age 6 weeks this female Beagle Lab type mix puppy was live-trapped in rural Zalma at an abandoned trailer house. We also trapped a similar looking but larger male with slightly longer fur. They were feral but being so young, in just 36 hours would come to us to be picked up and held. So smart and they cry to be let out to potty outside away from their play pen crate. $150 for the male, $200 for the female includes their shots, spay or neuter and de-worm if all done with one of our partner vets. Otherwise a $50 refund with proof of neuter or spay. Call Marilyn at 573-722-3035 to adopt.

We adopted out two tough-to-adopt dogs this week. One was a very timid, shy and un-socialized male adult Dachshund mix. This former stray came from the Glenn Allen area thanks to the Collins family who tried for several days to catch him.

When they drove him in the yard and I tried to give him his shot and check his teeth for an age, I was actually worried he would bite me. He was terrified… When dogs show the white of their eye they are warning you to be cautious, don’t push them. So I asked the family if they felt comfortable holding him while I gave his shot and the son, as I recall, picked up the terrified little dog.

We moved him into a small pen near the house where I would work on him for days before he would let me pick him up. Then it was exercise of pick up, pet, let down. Pick up, pet him, and let him back down. Over and over I would do this scenario. The pen was so small, a 6 x 6 foot cyclone fence kennel, that he had nowhere to go.

Eventually he would come to the fence to meet me, which took about two to three weeks. In the mean time I searched for other rescues to take him, none wanting him. I felt he could learn to better trust if as a house dog and on a leash 24/7 when out of his crate. If managed in that way he would have nowhere to hide and could more quickly learn to trust his handler.

So finally, after almost six weeks of being in my care and the cold weather approaching, I felt I could trust him enough to let me catch him. So I let him loose in the yard. He was so happy to be with the other dogs, but would not let me approach him.

That night he would not let me catch him to bring him in the house so I made him a bed beside the main entry door and left him outside without supper, the one lure that could probably convince him to come back to my arms again.

HE would not have it: I could not get near him. So I used the other dogs as a lure and once he went up the porch to follow them, I locked the gate and caught him. He was frantic for a few seconds, but did not attempt to bite.

So I brought him back in the house, gave him an extra yummy meal with wet and dry premium food. He was rewarded for letting me catch him and had a warmer softer bed to rest.

This roller coaster routine went on for weeks where something would cause a set-back for some reason for one or more days.

Finally he was consistent: in for meals, thaw times, and night time. Because more of the little house dogs were being adopted I was having additional time to spend with the little shy guy.

He was no longer holding on to my arm like Velcro when I would pick him up. He would go to his crate without me lifting him and carrying him there. He would even let me turn him upside down in my lap to allow for full belly rubs.

He was starting to act like a mostly normal pet.

Finally on January 6, I brought him in to the vet for a neuter. Up until that time I did not want to spend the money on full vetting just to give him away to another rescue when we have so many other dogs here costing money. Fortunately he had made milestone improvements, albeit many weeks to get there.

“What do you want to name him,” Debbie asked.

I hadn’t even formally named him. Sometimes I called him Buddy, sometimes Puppy, other times Cutie. So I said, “How about Willie, as in Will He ever get adopted?”

When I brought this guy home he was extra sweet. It was as if he was saying, “I have never had it so good. Please don’t leave me like that again, I promise to work on being “normal”.

Actually I think his big change was due to two factors: he was relieved to be around someone he knew and the loose of his testosterone started to make a difference in his temperament after just 36 hours.

In all my years in rescue, I have never seen a neuter work so quickly in such a profound way with a dog with behavior issues similar to him. So I placed him on Petfinder and renamed him Collins, after his Good Samaritan family.

This weekend I received a call from a Memphis Tennessee family who loved his photos and wanted to adopt him. They were set that he would be their pet and had been pet less for about 8-10 years after looking a Golden Retriever.

They came up late Saturday and he left for another new adventure in his life.

I worry that he will adjust quickly and well, but they were set on him being the one they wanted. Being showered with affection and being an only dog, he hopefully will snuggle in and adjust to having no competition for the love he can get and give.

… Two feral black and red pups live trapped from under an abandoned trailer on Co Rd 712, near the meat locker and salvage yard. About 6 weeks old, male and female. FB

… Found Beagle black and tan adult was returned to owner thanks to FB post.

… $100 for a super sweet spayed kitty we saved with a now healed broken leg. FL neg. Shots and all are done. Kitty was found at Jer’s parking lot. (FB)

THANK YOU Deanna Buchheit and Buchheit Farm store for donating 3 bags of Purina ProPlan puppy food, several heated large water pails, and cleaning products. The Buchheit’s have adopted a dog from us in the past and are great supporters of the BCSP!

We LOVE Buchheits!  Donate a buck or more at the Jackson store for dog food and supplies when you shop.  Or, you can donate here directly to “Pounds for Paws”.   Also, Second Time Around in Marble Hill is takingdonations for the Stray Project. Monetary donations are accepted at the Bollinger County Veterinary Service, Marble Hill Coop, Buchheits, and the MHTown and Country.Please be advised that the Bollinger County Stray Project is not the county or City of Marble Hill dog catcher. When you have a stray we try to help and can usually offer solutions.  Patience is required of the caller towards our ability to find and implement a solution. I wish we had a magic wand but we don’t and can’t always help the callers in a manner they may demand of us.  Remember, we are volunteers and help as time and space allows.