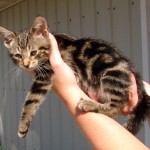 This beautiful kitten was tested negative for Feline Leukemia and has her first set of shots. She is about 8-9 weeks old. What a beauty she will be as an adult! Found as a stray and in foster. Call Marilyn at 573-722-3035 to adopt for $50 which is less than our vet costs for her test and shots. We have three more beautiful kittens up for adoption for the same price, in the same age range.

The week of July 12 will be my personal 10 year anniversary as unofficially being a foster and dog rescue. I say unofficially because we were not licensed, and frankly, we had no intentions of “rescuing” dogs or cats on a regular or constant basis. It all started by simply helping a friend of a friend…

The first litter we took into our home was born June 9, 2005. It was a litter of five pups. The mother was a purebred yellow Labrador Retriever. The man who owned her was disgusted that she hooked up with a mix breed male. He felt she was “ruined” when bred by a mutt. He wanted mom and the litter out of his life.

The man’s wife told the dilemma to my friend one Sunday morning at church. She was afraid for the lives of the mom and infant litter.

At that time I only had a list of over 300 rescue friends and contacted them by email. Most of those people were former dog obedience students of mine.

No one wanted  the mother and her pups. I was given a lead to call a single guy who was a lawyer. He lived in the country and had several rescue dogs, treating them like family. So I called him.

The lawyer did not hesitate and took in the brood. He had a stipulation however.  I had to have them removed by 5 to 6 weeks of age.

So suddenly I found myself as responsible for someone else’s mother and litter as if I was now their owner. Once they went to the lawyer’s home, he was officially a “foster.”  I was officially “the owner.” Two pups were black, two were yellow, one male was white.

OMG…What had I gotten myself into?

At that time we still had several of our own mastiffs.  Having a litter and the mother in our yard [should I fail to find them homes first] was mind boggling. How would I get my husband to agree or the dogs here to accept the mother dog?

I felt pretty good about working in the pups and we had pens for them too. It was another “thing” to find them homes.  And there was also the expense… Would I be able to get the money back we spent on a litter?

The lawyer purchased their food and kept them in his garage. The garage was getting hot and he had stopped cleaning it so the floor was covered in dog feces, which gave the litter ringworm…

I picked them up at 6 weeks of age, and that day WE unofficially and yet officially became a foster, a rescue, and I learned how to treat ringworm…

Two of those pups would remain with us and die in our home. At age 7 Cowboy passed from intestinal cancer.  Sweetheart died last year at age 9 of complications from severe allergies.

In those early days as an unofficial rescue we also fostered for the Sikeston Humane Shelter on occasion for abuse cases. That was how we got Barron, the 100 pound white/yellow Lab. He is 11 now and deals with painful arthritis.

Since we started this “adventure” stray dogs have greatly declined in the county. Saturday I had a family here from the Twin Bridges Hwy Y area. They had owned four dogs, all strays. All their dogs died from old age. They were without any strays for two years and yesterday came here to actually pick their own dog. IT would be a new experience for them to pick their own dog rather than a stray pick them or their yard then them…

Our work in our county has helped to reduce the intake and kill numbers for the Humane Society of SEMissouri in Cape. We personally take in over 200 to over 300 animals a year and find about that many more refuge in other rescues.

I know our “Spay Vouchers”, the $35 for spays for dogs and $25 we gave towards cats 2008 to 2012 contributed to reduced numbers of strays.  We’d give money that we didn’t have to give, which made us work smarter and harder to get higher dollar adoptions to pay our bills.

We have now officially documented over 1500 animals just through the Marble Hill vet office. All of the early rescues were not numbered.  At that time most of the found dogs ended up being transported to a rescue in St. Louis for adoption.  Any adopted here, the new owner paid the vet bill.

Finally the state stepped in and I was told to get a license. I was allowed the time to get up to code. Then Proposition B had state regulations that caused us a great deal of financial issues, a new inspector was also in our district and heads bucked on what I still consider unclear regulations which we eventually were able to get up to compliance.  Legislators, Shelley and Wayne, helped us stay open.

Nothing regarding animal neglect or abuse surprises me any longer. However, I am still surprised at times by who it is that deals a hand of abuse to their animals.

There is much I could complain about, but there is a great deal more which to give thanks. There are the fosters, the donors, the transporters, the Rescue Friends on FB who share and care.

I believe that this weekly article, thanks to Banner Press Editor Linda Redeffer, and the two grants from Sidewalk Angel Foundation (in New York), and the vouchers we gave before 2012 are the leading factors to the reduction of strays seen in the last ten years.

Thank you for your support, adoptions, donations, and for looking at your pets differently, about their need for heartworm, flea, and tick prevention.

… GSD male who was dumped at a church was taken by an Illinois rescue.

… Rudy, the one of 15 pups and only survivor, was adopted by a nurse and family in Jackson.

Dogs with Heartworm (HW), Erlichia, special needs, or that were euthanized:

… Whippoorwill Lake Aussie mix is positive stage 2 for Hw and for Erlichia.

Please, when you shop at Buchheit Farm Store in Jackson, donate some money for the Pounds for Paws promotion this month. You can also donate at the vet office, Coop in MH, and on Pay Pal on our website and FB. THANKS for your support!

Please be advised that the Bollinger County Stray Project is not the county or City of Marble Hill dog catcher. When you have a stray we try to help and can usually offer solutions.  Patience is required of the caller towards our ability to find and implement a solution. I wish we had a magic wand but we don’t and can’t always help the callers in a manner they may demand of us.  Remember, we are volunteers and help as time and space allows.

Donations needed to help with cost of sealing outdoor kennels to Missouri Department of Agriculture standards. Depending on how much the brick soaks up the surface application, our costs are estimated from $2,500 to $3,500 to complete.

Please do the following when your pets are expecting or caring for a litter: offer any pregnant dog small-breed-puppy-food the final 1-2 weeks before delivery and while the pups are nursing. Give those mothers all the food they want: bowls full all day and lots of fresh water available all day.   Cats need kitten food.  Free feed the higher calorie food during the nursing stage to help mom make milk and maintain her own body mass.  Babies need to be de-wormed as young as 1-2 weeks, then every 7-10 days until age 10-weeks or older if in a confined environment with re-infestation concerns.

We LOVE Buchheits!  Donate a buck or more at the Jackson store for dog food and supplies when you shop.  Or, you can donate here directly to “Pounds for Paws”.   Also, Second Time Around in Marble Hill is takingdonations for the Stray Project. Monetary donations are accepted at the Bollinger County Veterinary Service, Marble Hill Coop, Buchheits, and the MHTown and Country.