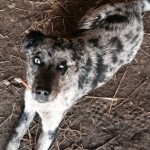 Tammy Beck found this dog running along Highway 51. The dog was chasing vehicles, acting like a dog who wanted in the vehicle, not a dog chasing for fun. Tammy posted the dog on her FB site. Our next door neighbor said she recognized the dog who had been at her house for two days. Please call 573-722-3035 to claim. We think this dog is an Australian Shepherd and Catahoula mix or Australian Shepherd and Lab mix, Blue Merle type.

Thursday night I listed a FOUND chocolate Lab male on our Facebook (FB) site.  Within ten hours I received a call from his owner.

Another match, the sixth return so far in 2014! That is two-and-a-half returns a month.  I think that the numbers will continue to increase this year. Thanks to the team of citizens who watch SEMO LOST PETS and our FB page!

Amazing how technology works and how fast it worked in this recent case.

Speaking of technology, our telephone line went out of service late Friday. Thank goodness we now have satellite email service. As of Monday noon the phone line was still out of commission. We apologize for any inconvenience this may have caused you. Please get photos of pets in need so we can post where needed to receive assistance.

Even with the phone out, we had four adoptions this weekend. All were black or mostly black.

All three of the Lab mix stray pups from the abandoned hunting cabin on Highway E were adopted. Another chapter completed.

A note to whoever dumped them: trash to you, treasure to families in Wishing, that are Waiting, and hearts Wanting and families Who Were Willing to adopt.

8:00 Saturday morning I met Karen and Randy Sanders at the Arab gas station with the alpha sister. She had received a bath, something I give almost all adopted dogs before leaving. The Sander’s met  Judy Kirkpatrick [Charleston Mo] at Scott City then to St. Louis where her family from Cuba Mo would be waiting. She would be their first family pet for their three children.

The little solid black male was adopted by a young family from Pittsburg Illinois.  He is in the National Guard. His squad leader was one of his references. I would learn he was considered the top soldier in his unit. I also called a friend who is a veterinarian who gave him a raving review. When he drove in the yard early, I was still doing chores. The handsome young man offered to help carry dog food and clean kennels. I told him his fiancé was very fortunate and he would surely be a successful person in life with his work ethic drive, personality and good looks. He is a young man who was brought up right.

While the soldier was still in the yard the third adopting family drove in the yard. The Braswell’s are repeat adopters from Arnold Mo. They recently posted their red Lab mix male pup on our FB page. He was formally known as Dr. Ben Carson. I asked them if they had a chance to do more research on their pup’s name-sake. They had and were impressed with the man Dr. Carson as I am too.

The Braswell’s felt their red pup needed a playmate. I chose the little black and tan female as a match and they agreed. However, when they came to pick her up, they met her solid black brother (who was picked by the soldier), and they also fell in love with him!

The soldier, Brock, and his fiancé Kacey were “set” on the little black male, who they were going to call “Bear”. There was almost a moment like Black Friday at Wal-Mart, with just one sale item left on the shelf (I’m kidding!)…

So black Bear, black and tan female Delilah, and the transported black female Miku all have homes that “treasure” them.

Do you know who dumped them? They look like Labs. Two were solid black with a slight curl to their tails. Two had pink tongues. I never checked the third pup until the Braswell’s wondered the genetics. The black and tan’s tongue was mostly black. The black and tan pup was marked and with the ears of a possible Rottweiler mix. Could be a distant black and tan hound, however, all three pups had short Lab ears, and she wore a Lab otter-trademark-tail..

This is what I think the mix was: at least half to ¾ Labrador, 1/8 to-a-quarter Chow, and 1/8 to-a-quarter Rottweiler. Who in the Zalma area has had pups recently with adult dogs of that mix type? Mom would be dried up now, no more milk, breasts pulling up. She is ready to be spayed and frankly, should be spayed so the “act” to dispose of unwanted pups ends now.

Sunday we were expecting two more adoptions of black dogs. One caller was from Jackson and they wanted Clarabelle, the Lab and Border Collie mix. However, a detour to Safe Harbor Animal Sanctuary and they found a good match there.

It was a sad for our girl, but a happy day for the Safe Harbor dog. Clarabelle’s feeling were not hurt and neither were mine I rejoice for any dog that has been abandoned or relinquished to find a home to “treasure” them.

Molly Bea Polka Party joined her new family about 4:00 Sunday.  They were older than I and from Fenton Missouri. They just lost their loyal dog.  Being older they wanted a smaller Lab type who was submissive, housebroke, and mellow.  18 month old Molly fit the bill. She had just completed her second round of Heartworm treatment and was ready.

Molly had been rescued by Gene Sullinger of Puxico. Gene is in her 70’s. Her new familys’ wife’s name is Jean too. The two ladies talked to each other on our tele and that sealed the deal.

Oddly Gene told me she was about to call to ask about Molly Bea. Molly helped Gene cope with the death of her husband last summer. She considered this mutt stray a “treasure” and made her a house dog after she was bred by two neighborhood dogs. We whelped her nine pups in our bedroom, later placing some and finding a rescue to take the rest.

Your trash, another’s treasure: think outside of the box. It is fun to learn how your pups and unwanted adult pets found homes all over the state or United States. That wimpy dog that annoys you might be a great dog with kids. If your dog won’t work cattle it might be a great house dog for an active family. Your unwanted pet may be an amazing gift, a treasure, to another human being.

… Chocolate Lab, age 2, returned to owner 10 hours of being listed on our FB page.

We do not have any room to isolate large breed dogs at this time and large breed pens are full.

Check out our FB site for updates and photos of posted strays. We are also seeking help with the vet costs for Holly Hunter who has been boarded for two weeks while receiving treatment for her contagious mange. Also we have treated several Project dogs for Heartworm and can not recover those costs in the adoption fees. Would you consider helping us with those costs? Donations may be tax deductable.