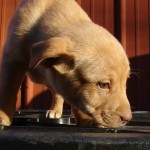 We started with a litter of 11 gold to red pups. Now there are just two left, one of them on hold for another day so I can get references checked before a transport to central Iowa. Meet Dr. Madeleine Bre’s, named after the first woman doctor from Sweden. The owner of this litter was a nurse who worked for my heart doctor, so they were all named after famous doctors in our late and early history. Her adoption fee is $200 which includes all her shots and spay and other care we have given. Call Marilyn to adopt this 11 week old pup at 573-722-3035. WE think mom is a Weimaraner Lab mix.

A caller from the rural Puxico area called me about a young stray dog.  She thought he was a Border collie or mix of.  When she sent me photos I took three of her better pictures and posted them on our Facebook (FB) page within 24 hours of receiving them.

He was listed in the Banner Press that week as a FOUND dog.  No owner, family friend or friends of the owner called for him.

This stray had already been at the Puxico house for a few days and she had asked neighbors if he belonged to them searching to no avail.

The pup was loose on her property and could have easily gone home if he knew how to get home.  He however decided to stay where he was.

When I reviewed his photos I felt he was likely a Border Collie and Australian Shepherd mix.  One ear seemed out of sink, twisting like a mix’s ears often do.  Also his color was a tri-color which I have never seen in a purebred Border Collie, and don’t know it they have that color in their breed standard.

When we finally had room, several days later, the property owner brought him to me and I tested him for negative for Parvo.  I then I dewormed and vaccinated and then kenneled him for two weeks before moving him into a pen with two young female pups his age.  His teeth looked like a pup of 5-6 months of age.

When he came he was wearing a collar with no ID.  He was not microchipped either.  So I called him Patrick Jane, after the star of a favorite TV program’s leading star.  I figured the English accent, being a European breed and the wavy coat all kind of resembled the TV character.  The name was memorable to me and would be to shoppers on the Petfinder site when I would get him listed.

He was with us about 3 weeks before I listed him.  Calls came in.  Others here to adopt another dog looked at him with great interest as well, but Patrick Jane would require an active family familiar with the Border Collie energy.  Once adopted, I don’t want a family struggling to return an energetic dog.

Then a family who had personal knowledge of the breed called.  He was brought in and neutered a day or two before they came to visit.  He sounded perfect for their home and when they met him the adoption was made final.  They had an excellent vet reference, having given their previous pet Heartworm prevention.  They used flea prevention and their past pet’s shots had been kept up to date.  They did not tether or chain their dogs either.  He would become part of their family.

By then he had been on our property, for a month.  I received a letter on Saturday with a short note saying how much they loved him.

Imagine my shock when I also received a call last week, almost two months after this dog had been missing, from an angry man who suggested I may have stole his dog.  He was certain I had his pup and if adopted out, I needed to give it back to him.  Also that I was “in it for the money”, this after a month of feeding the dog ($30), giving him shots (over $30), testing for Parvo ($40), flea and HW prevention ($20), Heartworm test, neuter,  and my gas to take him in for his vetting and neuter.  Over $200 in expenses put into this pup in just one month.

I am not in this job for the money.  Remember, this is an all volunteer effort.  I got nothing except a happy family and later an angry call that their dog was missing.

Last Monday I had a call about a small poodle type dog, found 3 miles from Patton.  We posted her within 24 hours of getting her photos and she was shared on FB where her picture was cross posted on several sites.  Her owner called me and a match was made within 6 days of becoming lost.

When you have lost a dog I try to find you, but you should be busy trying to find your pet.  I have limited resources and time.  So we post in the Banner Press and recently started to post on FB soon after receiving photos.  You can also post your lost pet’s photos on our site as well as stray pets that are found.

You should also call veterinarians in the area, all of them within a 30 mile area.  The Advance and Marble Hill vets will ask you to contact us.  The Bollinger County Sheriff’s department will have you call us and or the vet’s office.  I am unsure what the Stoddard County dispatchers are told to do, however, I will ask them to keep in step with our team from Bollinger County.

We are not obligated to hold pets longer than five days or ten days with a collar before we adopt them out.  Vicious or severely wounded or sick dogs can be euthanized on the spot for safety or humane reasons.

Adoptions, return to owner or placed in other rescues (7):

… Black Poodle or mix, lost and found about 2 miles from owner’s home, Patton area.  Thank you Mrs. Breitenstein for caring for this little stray.

… Dr. Elizabeth Blackwell, sister to above pup, adopted by an office mgr in Sikeston.

… Fostering three dogs from the Patton area whose  disabled owner’s home burnt down.  Waiting for them to contact me if they want to relinquish or when they can take them back.  One white dog has soot on his coat.  Another has a deep cut on his foot, two Boxer type mix pups about 6 months of age.  The other a black with white fur that makes him look old but I think he is only about age 2-4 with very clean teeth.  Owner please call me at 573-722-3035.

… Asked to help find a rescue for an intact Siberian Husky in Festus, who bit a 9-mo-old child.

We just took in another thin and wormy litter of pups.  Please do the following when you pets are expecting or caring for a litter:    offer any pregnant dog small-breed-puppy-food the final 1-2 weeks before delivery and while the pups are nursing. Give those mothers all the food they want: bowls full all day and lots of fresh water available all day.   Cats need kitten food.  Free feed the higher calorie food during the nursing stage to help mom make milk and maintain her own body mass.  Babies need to be dewormed as young as 1-2 weeks, then every 7-10 days until age 10-weeks or older if in a confined environment with re-infestation concerns.